A cryptic message from the past sends James Bond on a rogue mission to Mexico City and eventually Rome, where he meets Lucia Sciarra (Monica Bellucci), the beautiful and forbidden widow of an infamous criminal.  Bond infiltrates a secret meeting and uncovers the existence of the sinister organisation known as SPECTRE. 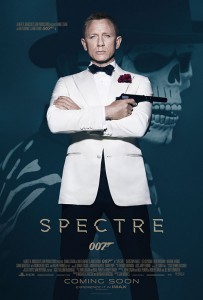 When approaching the 24th James Bond movie, SPECTRE, from Albert R. Broccoli’s EON Productions, Metro-Goldwyn-Mayer Studios and Sony Pictures Entertainment, the filmmakers were keen to ensure that the film followed on closely from its predecessor, the $1.1 billion global smash Skyfall. Daniel Craig[2], of course, is back for his fourth outing as 007, while the characters of Q (played by Ben Whishaw) and Moneypenny (Naomie Harris) both return after their reintroduction to the series in Skyfall. The new M (Ralph Fiennes) also returns. The chance to explore all these characters’ stories was of vital importance to Sam Mendes[3], who is back for a second stint in the director’s chair.

The filmmakers wanted to immerse Bond in a magnificent festival in a LatinAmerican city. “And it doesn’t get any bigger than Mexico City and the Day of the Dead,” says Mendes. Indeed, the producers regard the pre-title Day of the Dead sequence as one of their career highlights. “Though we have worked on the James Bond films for more than 35 years, we both felt that the opening sequence to SPECTRE was something magnificent to behold, and that it sets the tone for an exceptional picture,” says producers Michael G. Wilson.

The parade included 10 decorative skeleton maquettes and floats, the tallest of which towered 11 metres high. The carnival centrepiece was ‘La Calavera Catrina’ skeleton, inspired by an etching from Mexican illustrator and lithographer José Guadalupe Posada, which wore a hat that was 10 metres wide.

Elsewhere, when searching at a contrasting, colder environment, Gassner and Mendes settled on the Alps, which feature some key scenes, including Bond’s introduction to an important character at the Hoffler Klinik.

When developing the romantic aspect of the film, the filmmakers opted to have Bond’s most intimate relationship blossom in North Africa, in Tangier and the Sahara desert. “If you want this incredible immense landscape, this emptiness, then where better than the Sahara?” asks Mendes. “So with all these locations you have these tones that are quite different, and quite extreme.”

As Skyfall drew to a close, the filmmakers introduced the man who would take over the role of the iconic character M:actor Ralph Fiennes inheriting the part from Dame Judi Dench. Fiennes grew up an avid reader of Ian Fleming, John le Carré and Graham Greene and feels that the character of M is moulded by the image of the Cold War spy.

For actor Andrew Scott, the pressure exerted by Max Denbigh/C is a delight to play. Scott notes that his character’s ideas are incredibly relevant to the modern world. “The idea of people losing control of their digital ghost and their online legacy, is central to the storyline in SPECTRE,” he says.

Bond also encounters the beautiful widow Lucia Sciarra, played by Italian Monica Bellucci, an actress that producers Michael G. Wilson and Barbara Broccoli had tried to recruit in the past, denied only forscheduling conflicts. “We’re delighted to finally get her,” says Wilson. “She is terrific in the role.” Another woman playing a pivotal role in SPECTRE is Madeleine Swann, who is brought to the screen by French actress Léa Seydoux.

Every location in SPECTRE features spectacular stunts and set pieces, starting with the Day of the Dead scenes in Mexico City, which employed 1,520 extras, dressed and made up by 107 different make-up artists, 98 of whom were local. On each working day it took threeandahalf hours to get the crowd prepared.

In Rome, the filmmakers shot for four days at the Museo della Civiltà Romana, which doubled for a cemetery where Bond first sees the widow, Lucia. The second unit then spent a further 18 nights over the course of three weeks shooting the stunning night-time car chase sequence, where Bond in his Aston Martin DB10 and Hinx in a Jaguar C-X75 race through the city streets.

One of the Austria locations, the village of Obertilliach, has a population of only 700 people. Still, 50 locals joined the crew, included among 250 Austrians in the total crew of 480.

No Bond film would be complete without a special theme song. The filmmakers were delighted to recruit multi-platinum selling artist Sam Smith who writes the title track, ‘Writing’s On The Wall’, with fellow Grammy Award-winner Jimmy Napes.