Splice is a 2009 science fiction-horror film directed by Vincenzo Natali and starring Adrien Brody and Sarah Polley, who portray a young scientist couple, choosing to introduce human DNA into their work of splicing animal genes. 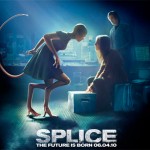 The film premiered on October 6, 2009 at Sitges Film Festival, where it won “Best Special Effects” and was in the running for “Best Film”, and was part of the 2010 Sundance Film Festival in Park City, Utah. After a bidding war with Apparition, The Weinstein Company, Newmarket Films, First Look Studios, and Samuel Goldwyn Films, Dark Castle Entertainment purchased the film in February 2010.

Splice was written by director Vincenzo Natali and screenwriters Doug Taylor and Antoinette Terry Bryant. The script was originally meant to follow up Natali’s Cube (1997), but the budget and restricted technology hindered the project. In 2007, the project entered active development as a 75% Canadian and 25% French co-production, receiving a budget of $26 million.

The director described the film: “Splice is very much about our genetic future and the way science is catching up with much of the fiction out there. [This] is a serious film and an emotional one. And there’s sex… Very unconventional sex. The centerpiece of the movie is a creature which goes through a dramatic evolutionary process. The goal is to create something shocking but also very subtle and completely believable.”

In October 2007, actors Brody and Polley were cast into the lead roles. Production began the following November in Toronto, Ontario. It was aided by Telefilm Canada’s funding of US$2.5 million. Filming took place in Toronto and Hamilton, Ontario and concluded in February 2008.

In an interview, when asked if there would be any sequels, Natali responded “I don’t think so. It could happen, but it would have required the movie to make a lot of money in the States, but even though the ending of the film appears to be setting up a sequel that was never my intention. All of my films end with a question, and somewhat ambiguously, and they always imply the beginning of another story, I like to leave the audience with something to ponder.”

The Film Stage gave the movie a 9 out of 10 saying that “This is more than a typical B-movie. It’s got two excellent strong performances, is beautifully shot and is lovably strange. It’ll most likely be divisive due to its tone and some of the more stranger [sic.] aspects, but any surreal and crazy movie nerd will cherish the Splice experience. So far, it’s one of the best films of the year.”

The Flick Cast said “Splice is funny, frightening, and shocking all at once. It’s a disturbing commentary on where science is heading, and it is not easily shaken off once you leave the theatre.”