The top grossing Russian film of 2013 and first Russian motion picture presented in IMAX® 3D, Stalingrad is an epic look at the battle that turned the tide of World War II. In Stalingrad, directed by Fedor Bondarchuk, the scale of the battle contrasts dramatically with the human drama of the Russian soldiers, the few remaining civilians and their invaders into Stalingrad. 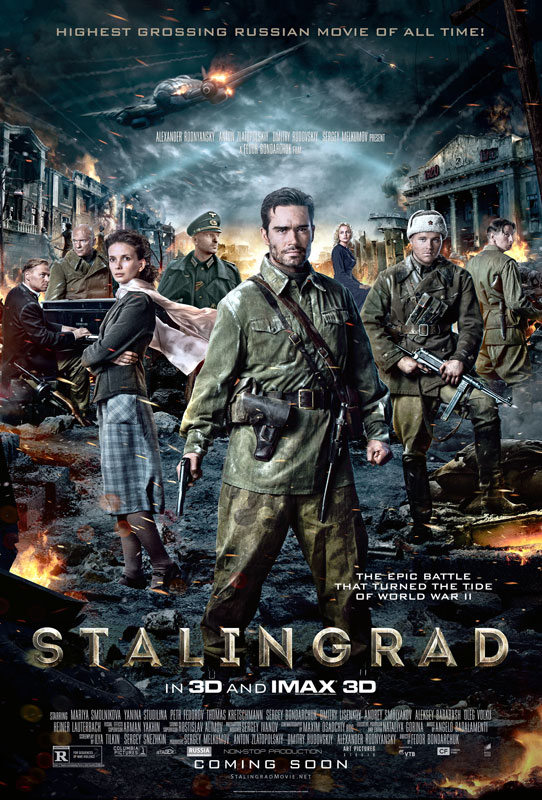 In Fedor Bondarchuk’s Stalingrad, it took about three months to develop and polish fire simulation with Houdini software. In addition to the pyrotechnicians’ work on location, the final version of the film also features a lot of digital fire sequences.

Stalingrad was shot over 79 days, starting in September 2011 and wrapping in August 2012.  From the beginning, director Bondarchuk insisted on shooting in stereo, as he realized that it would make the film highly expressive and give the audience full immersion into its atmosphere. Stalingrad was the first stereo experience, not only for Fedor Bondarchuk and for Maxim Osadchiy, the director of photography, but also for the physical and visual-effects specialists involved.

Maxim Osadchiy, director of photography, worked with a team of American 3D-supervisors and stereographers who worked on The Amazing Spider-Man and The Hobbit.

Additionally, a historical war drama with no tanks is like a football match with no goals scored. So, military vehicles are present in Fedor Bondarchuk’s film. On the set there were T-34 tanks, a German tank destroyer Marder («Marten») and a heavy Nazi tank Pz-IV (Pz.Kpfw. IV).

These tanks were all replicas constructed for the film. Pz-IV was built on the chassis of a Soviet T-44 tank. The production designer heavily modified the turret, welded on extra armour plates, covered the track wheels with shields, and painted Nazi swastikas on the sides. The tank destroyer was built on a civilian ATV chassis. Finally, the T-34(76), is a full-scale model made of plastic and plywood, modeled by specialists from Vitebsk. The same designers created the model of the shot-down plane.

Most of the Stalingrad shooting took place near St. Petersburg. The production team (supervised by production designer Sergey Ivanov) built the set, which included bombed buildings, as well as areas of the town occupied by the Nazi troops. Sergey Ivanov had already worked on the big historical drama Tsar, directed by Pavel Lungin.  Nonetheless, Stalingrad turned out to be a project on a different level, because of the goals set by the director and the efforts made to realize them.

The Stalingrad shooting location looked astonishing due to its size and the preparations made. The crew had organized a real construction site, because it was impossible to achieve the goals set by Bondarchuk with typical decorative methods and techniques. A crew of 400 professionals erected and decorated the set.

The most difficult scene to shoot was a melee with all the actors, stunts and extras involved. If one person made an error, the whole scene would have to be reshot. It was also difficult to shoot explosions right next to the actors. The crew resorted to special pneumatic devices to pull the actors from the epicenter. First, it was thoroughly rehearsed with a stuntman.  Later, Petr Fedorov and Dmitry Lisenkov would have to be pulled back from the pyrotechnic explosion themselves.

The scene with the plane, like the rest of the action scenes in the film, is stylized in a hyperrealistic manner, according to Visual Effects Supervisor Arman Yahin. Besides fire, smoke and destruction simulation, the team did a lot of background editing. For instance, the Fukushima scene was filmed on the same set as Stalingrad, but from a different angle, and with a different sky and background. All the buildings several dozen meters away from the camera were digital. Those were 3D models of the buildings, sometimes 2D projections on low-poly geometry.

Arman Yahin believes that Stalingrad will be a breakthrough for the developing Russian filmmaking industry.