If you build the foundations of peace . . . will it come? This fascinating question lies at the heart of State 194, a vital and revealing look deep inside Israel and Palestine at the men and women trying to seize an historic opportunity to end the conflict and make implementing the two-state solution a reality right now. From the halls of power, across youthful social networks and on the streets, it is aremarkablestory of those who are attempting to transform an endangered thread of hope into something tangible. 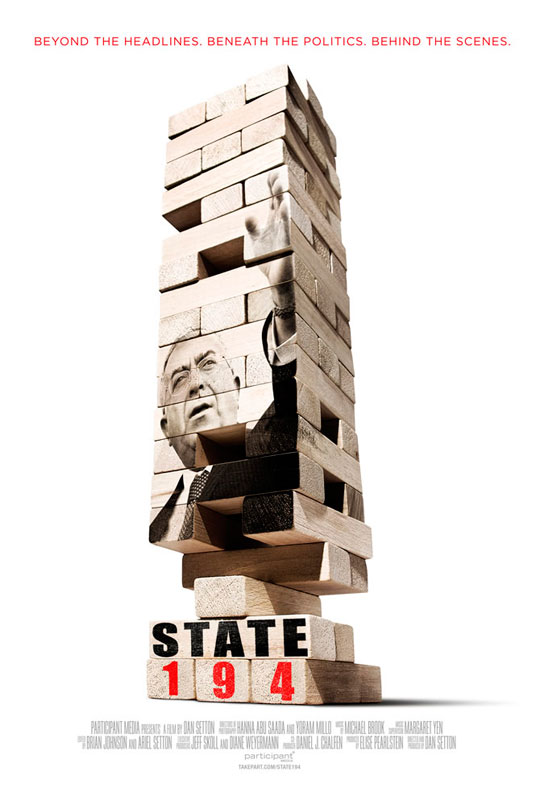 For some Israelis and Palestinians finding the truth, and finding internal peace, also has to
do with forgiveness. Grief has been a reality of life on both sides as the conflict has taken
thousands of lives, both soldiers and civilians. STATE 194 tells this part of the story

Acclaimed Israeli filmmaker Dan Setton began the journey of STATE 194 after hearing Palestinian Prime Minister Salam Fayyad make a radio address in 2009. At that moment, Fayyad, a former economist, dedicated pragmatist and unlikely optimist, appeared to be establishing himself as a non-violent peacemaker the likes of which the region had never seen. At a time when peace negotiations were at a perilous standstill, when the controversial, historically violent Hamas party had taken control of the Gaza portion of the Palestinian territories, and when both poverty and lawlessness were raging in the West Bank area, Fayyad struck out to create a fresh paradigm.

He decided to turn his focus to the one thing the Palestinians could control under their circumstancesof limited self-rule: building the kind of basic social services and economic infrastructure the people would need in order to one day soon become a strong, safe and viable nation built on shared human values. With his passionate but understated style, and his emphasis on integrity and competence in governance, he looked to be a serious game changer.

STATE 194 is not only a chance for audiences to see the rapid changes taking place in the Middle East, it is also a chance to see inside a world that to many Americans remainsshrouded in mystery. The Palestinian territories have been experienced in the U.S. almost exclusively in provocative news imagery showcasing scenes of stone-throwing kids and violent protest. Few people have ever seen more –or had a chance to experience the West Bank as a vibrant urban area rife with cosmopolitan citizens who are working for peace.

STATE 194 busts the stereotypes and also shows another side of Palestinian youth –a wired generation of activist bloggers and grass roots social networkers who are attempting to forge a new reality that moves beyond the past. For Setton, it was essential to get this youthful dynamism, so much a part of the region, into the movie, which he does through two young bloggers: Madj Biltaji in the West Bank and her 9 friend Mahmoud El-Madawi, who works in the more dangerous atmosphere of Gaza under Hamas rule.