Set backstage in the minutes before three iconic product launches spanning Jobs’ career—beginning with the Macintosh in 1984, and ending with the unveiling of the iMac in 1998—Steve Jobs takes us behind the scenes of the digital revolution to paint an intimate portrait of the brilliant man at its epicenter. 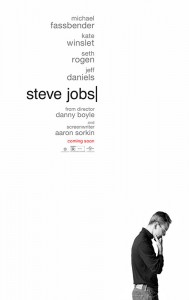 Ultimately, I hope viewers will find him to be human—and someone who probably could have been happier if he didn’t think that kindness and genius were binary. – writer Aaron Sorkin

Talk about what went through your mind when you got Aaron Sorkin’s script and read it for the first time. What was it about the screenplay that made you want to make this movie?[2]

I read the script and felt I’d be crazy not to do it. It took my breath away. I felt I’d never done anything like it before. The challenges of it—how self-contained it was, what a breathless exercise in language it was—were immensely appealing to me. At the same time the character of Steve Jobs that Aaron created—the Steve who exists in the script, who overlaps in some ways with the historical figure and in other ways doesn’t—was hugely appealing to me. He’s a character of Shakespearian proportions. He’s mesmerising and brutalising and entertaining. I saw in Sorkin’s screenplay a lot of people in orbit around this extraordinary planet, which is the character of Steve Jobs. There are people like that in life who we end up orbiting around; our lives are lived in their reflection in some way, and we’re unable to break away from them. They have a gravitational pull. They are people who inspire devotion. That’s a fascinating kind of character to examine. There are people in this character’s life who are clearly deeply devoted to him. Other characters regard him as a monster. And, in a sense, he is a monster made beautiful by language…and by two women.

You have said the film isn’t a biopic and that it’s not an attempt to recount a rigidly factual history of Jobs’ life, but you still depict actual, real-life figures. What elements of the real figures—of Steve Jobs, and of the various members of his team—did you incorporate into the story?[3]

We’re deeply indebted to Walter Isaacson’s book and the depth of his research, but we wanted the movie to be a different kind of journey. Sorkin describes the film as an “impressionistic portrait.” There are ideas that clearly come out of real life, but the film is an abstraction. It takes events—some of them real, some of them imagined—and pushes them into three acts, structured around the launches of the Macintosh in 1984, the NeXTcube in 1988, and the iMac in 1998. Six characters turn up three times, 40 minutes before each product is launched, and just bang on each other. That’s not real life; it’s a heightened version of real life. Sorkin’s script is about so much more than Steve Jobs as a person. He’s changed one of the most precious and vital things in our lives, which is the way we communicate, the way we interact with each other—and yet many of his personal interactions were deeply dysfunctional.

The movie is about teams as well—and by that, I mean it’s about a person who was able to propel individuals and groups to create. There’s a wit and humour to our character of Steve, and an understanding of how people love finding someone who inspires them to push themselves. He was almost crazy in his determination to transform people.

Before filming, you budgeted time for extensive rehearsal periods and you rehearsed and filmed each act separately, in sequence. Can you talk a little bit about why you landed on that strategy and in what ways the finished film, and the performances, benefited from that?[4]

One of the extraordinary things about Aaron’s language is the rhythm of it, the propulsion of it, and I was excited to see actors speak the language, but I also knew that it would be very challenging for them. Because there are three launches, we concentrated on one part at a time, rehearsing and then filming each act separately, and in sequence. It’s very rare in film of course to shoot in sequence. But it ultimately lent the performances and the story a kind of momentum. It allowed the actors to commit themselves to that one act and to concentrate on the way they would look, sound and feel at that period in their character’s life. It allowed them to take pause and take stock.

The actors are always in motion, through each of these acts. Of course that’s partly because these people are in the midst of final preparations for a launch, and there is last-minute business to be taken care of, but it is also very intentional because it was part of Jobs’ philosophy. He would walk and talk. He didn’t want to sit around having boring meetings. He always wanted to walk and talk because it lent a certain momentum to the undertaking, whatever it may have been. We approached rehearsal and filming in a way that I hoped would liberate the actors physically; I didn’t want to create spaces on set that
were confined, but rather provide a sense of freedom and openness. I didn’t want the actors to have to worry too much about where they were standing, where they were going. At the beginning of rehearsal, we let everyone move where they wanted.

Gradually, as we approached the day of shooting, we found our way into blocking the scenes. The freedom of movement that we were going for was also helped hugely by our use of Steadicam, which is usually reserved for action sequences or chase scenes. The Steadicam lent itself to that sense of perpetual motion and freedom. Our Steadicam operator, Geoff Healey, is an artist, and along with Alwin Küchler’s lighting, his work allowed us to build wonderful, flowing scenes as the actors moved through the three spaces and acts.

Why did you decide to shoot the entire film in San Francisco?[5]

You hope the film, by some kind of osmosis, picks something up from that. I’ve long felt that if you honour the place you’re making the film about, it will reward you…through your own and the actors’ understanding and appreciation of it. There were also people who were at the original three launches that we met by arrangement or by accident during production.

How did you settle on the Flint Auditorium as the location for the Macintosh launch in Act One?[6]

The Flint Auditorium at De Anza Community College, in the heart of Cupertino, was where the actual Macintosh launch in 1984 took place. That stage was where Steve Jobs unveiled the Macintosh that day. So we were standing in his footsteps, literally. We filmed the first act on 16mm because it felt rough-edged, homemade and basic in what is a simple, functional theatre. It has almost a punk-ish energy to it…the early days of the launches. Act One, the Mac launch, is our modern day creation-myth. It’s Steve Jobs conjuring the future of computing—the first truly personal computer, the first humane computer—out of nothing. For the first time, someone thought to create a computer that felt a part of you. As Steve says in the movie, up to that point, in 1984, Hollywood had made computers scary things, but he wanted to make them feel like they belonged to you. Though clearly the time was not ready for that, because it didn’t work yet; he only achieved that later.

What was it in Michael Fassbender that made you believe he was the one who could breathe life into this character?[7]

I’ve never worked with an actor who went on such a journey as Michael did or had such ferocity of commitment. Not once did I see him look at a script or sides, and he had Hamlet-, Lear-like lines to recite every single day. He absorbed the script in a way that had nothing to do with rote learning. It was never a question of remembering, “Do I say this now?” He knew that script like he’d written it, which lent his performance a force that made it seem he was capable of creating something in front of you out of virtually nothing. I always thought there is something very Jobsian in Michael. He has that quality in him, which is this incredible intensity about the application of what he’s doing. He’s an intimidating actor, truly. But he has great wit, thank God.

Because it is a witty script and Michael mines the humour of it with incredible detail and comedy when he wants to. But he’s ferociously intimidating in his application, and he showed that in his preparation. I was lucky that I could bring together Sorkin’s script with an actor like that; my job was to make sure that nothing hindered it.

Can you speak a little bit about Seth Rogen’s approach to the role of Steve Wozniak?[8]

It was beyond valuable having the real Steve Wozniak around during rehearsal to talk to us about his experience with Jobs, and with Apple. Seth had the essence of Woz, right from the beginning. I can’t verbalise it; there’s something in Seth’s performance that reaches to the root of Woz’s character. As you are sometimes lucky to find with very funny people, there’s a very serious and ambitious and instinctive and skilled actor in there as well. Woz believes that you can be decent and gifted at the same time, and that’s an idea that runs like a golden thread through the film.

Woz’s cross to bear in the course of the story is that he’s trying to get Steve to acknowledge the importance of the past—he’s trying to get Steve to countenance that the past plays an important role in the process of creation, just as innovation does. But Steve only has a mind for one thing: innovation. For Steve there is only the future, where he’s aiming. What Woz says is, yes, innovation has a role in creation, but creation also depends on the people who come before you. You are always standing on someone’s shoulders, and the grace to observe that allows you to count yourself amongst them. That his best friend in the world, and the man with whom he dreamt up the personal computer, cannot acknowledge this causes him tremendous conflict. Seth delivers the endless optimism and anguish of this friendship beautifully.