In 1987, five young men—Ice Cube, Dr. Dre, Eazy-E, DJ Yella and MC Ren —using brutally honest rhymes and hardcore beats, transformed their frustration and anger about life in their inner-city Los Angeles neighborhood into the most powerful weapon they had: their music. 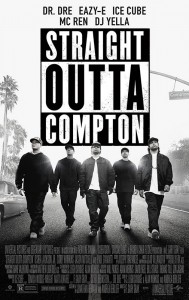 Andre Young, better known to millions around the world as Dr. Dre, was much more hesitant than the others about having their story brought to the big screen. For the artist/producer, whose albums “The Chronic” and “2001” continue to heavily influence West Coast rap and hiphop, those early years were incredibly personal, defining moments in his life, and he was skeptical about whether those moments could be captured with accuracy and integrity.

In 2009, Ice Cube came across a script that proved too tempting to overlook, and for the first time he jumpstarted the idea of a viable feature-film biography based on the group’s experiences, ones that began almost three decades prior. For Cube, there was no doubt that the filmed version of the N.W.A story would be dedicated to group founder Eric “Eazy-E” Wright, who had passed away in 1995. Cube reflects: “Thank God for Eazy, who had the vision and saw this music as the future, the records that people want to hear. He was so adamant about putting Compton on the map.”

With the participation of key players—including fellow N.W.A member Dr. Dre and Eazy-E’s widow, Tomica Woods-Wright, who would come on board as producers, and original group members MC Ren and DJ Yella, who joined as consultants, the team knew that they could do it right and pay homage to their story.

The screenplay, entitled Straight Outta Compton, originated from several years of interviews and research compiled by music documentarian S. Leigh Savidge (Welcome to Death Row) and screenwriter Alan Wenkus. That early draft would lay the foundation for what would become Andrea Berloff ’s working version, who along with screenwriter Jonathan Herman’s work, fine-tuned the material into the shooting script.

A longtime champion of the material and an integral part of its development at Universal Pictures, Scott Bernstein, former executive vice president of production at the studio, remained a part of the project as he left the studio to start his own film production company and produce Straight Outta Compton.

The man who would be responsible for guiding the team in finally bringing this complex story to theaters would be director F. Gary Gray. Deeply involved with the project since 2011, the director’s relationship with the material explored in the film is extremely personal, and a subject Gray embraces and feels in his core. As a child, he grew up on the same streets as the young men we follow in this story, watching the influx of crack cocaine and imported automatic weapons in the ’80s destroy homes and families.

Casting for the key roles of a complex, emotional, real-life street drama like Straight Outta Compton was highly personal for all and took an immense effort by Gray, Ice Cube, Dr. Dre, Woods-Wright and their fellow producers.

The roles of Eazy-E and Ice Cube were the first to be cast. As the early development stages of the project began to take shape, Ice Cube could easily envision his then-20- year-old son stepping into the on-screen role of Cube’s younger self. One look at O’Shea Jackson, Jr., and there’s no mistaking he is his father’s son. With no prior acting experience, Jackson was admittedly nervous about taking the role. “It started to become an obsession,” says Jackson. “I knew I couldn’t go see Straight Outta Compton and watch somebody else play this part.”

For the role of Eazy-E, actor Jason Mitchell, who was living in New Orleans at the time, submitted an audition tape that wowed the filmmakers from the get-go. Mitchell’s physicality, coupled with his intensity, made Gray and his fellow producers stand up and pay attention. With only a handful of acting credits to his name and no formal training, the 28-year-old made an indelible impact. Actor Corey Hawkins, a graduate of the prestigious Juilliard School, would be the next performer to be cast in the film, in the role of rap pioneer Dr. Dre.

Filming in South Los Angeles brought out neighbors who hoped to catch a glimpse of Ice Cube, Dr. Dre, DJ Yella and MC Ren. The “Kings of Compton” were home to tell their story, and they were welcomed with open arms. The one aspect of filming that the crew and cast could not deny were the dramatic parallels between the violent clashes, pointed arrests and harassment of the young black men of the mid-’80s and the modernday deaths of young black men at the hands of law enforcement around the U.S. All were in the hearts and minds of the production as the team re-created violent encounters that inspired much of N.W.A’s music.