Stu (Kumail Nanjiani) is a chatty, mild-mannered, risk-averse Millennial who works in a sporting goods store while moonlighting as an Uber driver trying to make enough money to finance a spin gym business to get with the girl of his dreams — a plan that’s about as likely to work as it sounds. He will do anything to save his five-star driver’s rating. 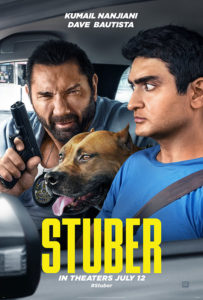 For the film’s opening where Vic and his partner Sara are in hot pursuit of drug dealer Tedjo, the filmmakers were inspired by the tense, breathtaking action sequences that open the James Bond films.

Vic Manning (Dave Bautista) is a middle aged, old school, alpha detective. He’s divorced from his wife, married to his job, and neglectful of his parental duties to his grownup artist daughter, Nicole. Years of using his hulking body as a battering ram have taken its toll, but Vic still pushes it to the limit. Allergic to both conversation and technology, Vic is quick to get angry and quick to pull the trigger — a combo that everyone loves in a cop!

One day, leaving his eye doctor’s office after having Lasik surgery, Vic receives a tip on the whereabouts of the drug dealer who murdered his partner, his Great White Whale. Unfortunately, Vic wouldn’t be able to spot a whale if it was right in front of him. Even a white one. Eyes blurry and unable to drive himself, Vic calls for an Uber, and guess who answers. Can these two very different men share a Nissan Leaf while hunting drug dealers across Los Angeles? It’s like The Odd Couple but with more explosions.

In 2016, screenwriter Tripper Clancy and his manager Jake Wagner came up with the idea of a movie about titled Stuber about an Uber driver named Stu. “I always knew based on the name that this would be an action comedy, and the day after Jake and I discussed it I basically had the entire movie in my head,” recalls Clancy. “The buddy cop genre is a personal favorite,” he adds.

It wasn’t long after Clancy developed the script that it was acquired by Twentieth Century Fox, with Michael Dowse (What If, Goon) set to direct, Jonathan Goldstein and John Francis Daley (Game Night, Vacation) producing and Nicholas Thomas (Let’s Be Cops, Scare Tactics), Jeremiah Samuels (Sleepless, Secret in Their Eyes) and Jake Wagner (Killing Season, Evidence) attached as executive producers.

Director Dowse recalls, “After I read this script I thought it was the perfect recipe where you could do something that had a lot of heart and a lot of comedy but I thought the action sequences could work really well and all of these pieces could sort of feed into each other to make a pretty unique film.”

To play the film’s grizzled cop, the filmmakers knew they needed to find someone who not only embodied the tough guy physique and can take a punch but also someone who could follow the character’s arc and show the vulnerability that Vic ultimately achieves. . In other words, they needed a hard man with a soft side. They found their Vic in Dave Bautista, four-time WWE World Heavyweight Champion and two-time WWE Champion, best known to movie audiences for his role as Drax the Destroyer in Avengers: Infinity War and Guardians of the Galaxy.

To play Vic’s neglected but loving daughter, Nicole, filmmakers brought on Natalie Morales. “Nicole is definitely her father’s daughter. They bump heads a lot, and she clearly just wants her father to be present in her life, but the job has always come first. She’s strong-willed and has chosen to be an artist which couldn’t be farther from being in law enforcement,” says Morales.

“Stuber” was filmed mostly in and around Atlanta, GA, which it turns out, with a little help, looks a LOT like Los Angeles during a heatwave.

“When I wrote the script in my mind it was always going to be set in LA. I live very close to Koreatown so one of the opening scenes is in Koreatown. It goes down to Long Beach, all around Compton, the Valley. It’s really all over the place, “ says screenwriter Tripper Clancy.

Early on, production designer Naaman Marshall teamed up with the film’s director of photography Bobby Shore and director Dowse to make sure the locations not only looked like Los Angeles, but they could also serve the stunts and camera angles to give the movie the feeling Dowse was looking for.