From first-time writer-director Josh Boone and Judy Cairo, comes a comically rich yet emotionally raw romantic comedy about a family of writers who have nearly lost the plot of their own love stories. 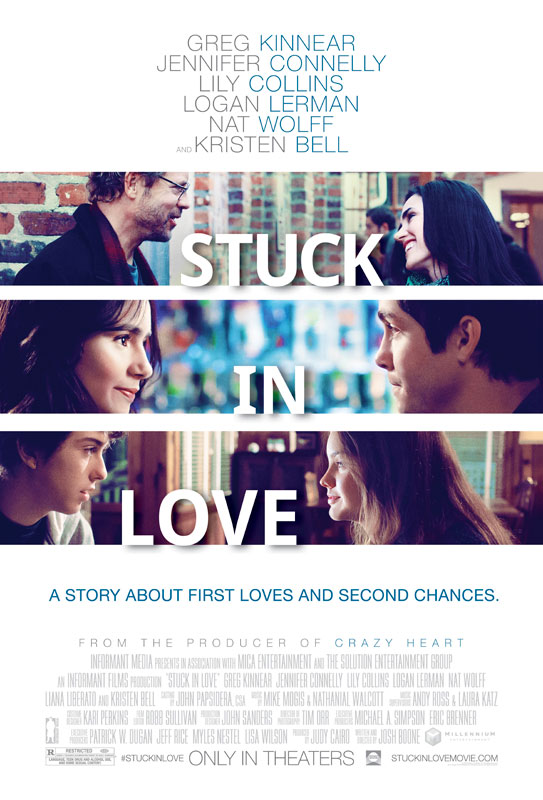 With Stuck in Love, Josh Boone takes on the theme of family dysfunction from his own fresh POV, one both unflinchingly hilarious and distinctly hopeful.  Featuring a diverse cast of award winners and up-and-comers — and driven by a resonant score from members of the indie rock band Bright Eyes and a soundtrack from some of today’s hottest artists–the film reveals how even amidst the travails of marriage, divorce, parenting and coming of age, the family ties that trip us up can turn into a lifeline.

Stuck in Love turned a new chapter when the filmmakers pulled off an initial casting coup – attracting Greg Kinnear in the role of the highly accomplished but heartsick family patriarch Bill Borgens.  Despite his broad range, Bill Borgens struck Kinnear as a very distinct character – a highly intelligent and insightful writer, a loving, devoted father . . . and a completely befuddled ex-husband at a complete loss when it comes to getting over his divorce.

That story took on even more dimensions when Jennifer Connelly was cast as Bill’s ex-wife. Connelly known for her complex portraits including her Academy Award® winning role as Alicia Nash, wife of the brilliant but schizophrenic John Nash in A BEAUTIFUL MIND – plays Erica not only as a confused ex-wife but as a mother regretful that her personal affairs have damaged her closeness with her daughter.

The palpable sparks between Kinnear and Connelly further added to the film’s romance.  “Greg brings something special to every single scene he does – in one scene he’s eating a bowl of cereal and just the way he does it just makes the scene – and Jennifer seemingly can’t do anything that isn’t true and honest,” observes Boone.  “Together, they brought out a wonderful chemistry.”