Submarine is a 2010 coming-of-age comedy-drama film adapted from the 2008 novel of the same name by Joe Dunthorne. The film is directed by Richard Ayoade and stars Craig Roberts, Yasmin Paige, Sally Hawkins and Paddy Considine. The film is Ayoade’s directorial debut. 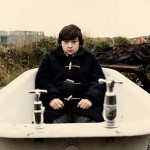 Original songs were written and performed by Alex Turner, the Arctic Monkeys frontman. It is his first effort as a solo artist. The soundtrack charted at 35 in the UK Album Chart

Filmed mostly in Barry, Wales, the movie is a portrait of Oliver Tate (Craig Roberts), who believes he is a tortured literary genius and fantasises about an outpouring of grief at his untimely death, when he is in fact socially inept, awkward and unpopular. Convinced that his marine biologist father (Noah Taylor) is depressed and his mother (Sally Hawkins) is having an affair with old flame Graham (Paddy Considine), “a hippy-looking twonk”, he embarks on a misguided campaign to bring the family back together while attempting to impress his classmate Jordana Bevan (Yasmin Paige), a straight-talking, eczema-suffering pyromaniac who “hates any place that could be termed romantic”.

Around 100 actors submitted video auditions for the roles of Oliver, Jordana and Chips. Michael Sheen and X Factor contestant Lucie Jones were originally cast in the film but dropped out due to other commitments.