Synchronicity is a mind-bending ‘Sci-fi Noir’ in the tradition of Blade Runner, Gattaca and Memento. Daring physicist Jim Beale has invented a machine that can fold space-time and ruthless corporate tycoon Klaus Meisner will stop at nothing to get it. When Jim uses the machine to tear open the fabric of the universe, a rare Dahlia appears from the future. But in order to keep the rights to his invention he must prove that it works by finding the flower’s identical match in the present. 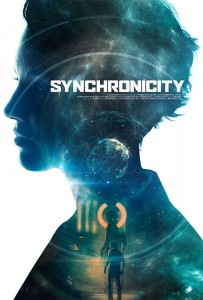 Composer Ben Lovett created the film’s original score at Echo Mountain Studios in Asheville, North Carolina, home of Moog Music and its legendary founder Bob Moog, the man who gave birth to the synthesizer and in turn, the existence of electronic music. During the scoring process Lovett often consulted the engineers at Moog Music about the principal techniques and specific instruments used to create the iconic sounds heard in film music around the dawn of the synthesizer created the likes of Vangelis, Wendy Carlos, and John Carpenter.

2008 when the world’s largest and most powerful particle accelerator, The Large Hadron Collider, began its investigation into the unsolved mysteries of the universe. It was also around this time that my interest in Film Noir from the 40s and 50s had become an obsession. As a filmmaker I wondered how I could combine these two central preoccupations of mine into one movie. I realized that the physicists in CERN were really like cosmic detectives, searching for clues about the origins of our existence, in the same way a hard boiled P.I. starts to unravel a mystery that eventually unlocks the secrets of some dark unknown.

Science fiction author and futurist Arthur C. Clarke stated that, “Any sufficiently advanced technology is indistinguishable from magic.” I would say this pretty accurately describes the concept of time travel. It’s considered science fiction because it’s theoretically possible by the laws of physics but impossible with our current technology. However the notion of “If I could just go back in time and…” usually resides in some kind of fantasy. It’s wish fulfillment, but technically it could happen.

So I thought what if the physicist who actually figured out how to fold space-time had never entertained such fantasies? What if for him the dream was simply discovery itself? And what if he was the one who was actually granted this enviable wish? As much as we’d all like to imagine ourselves saving the world by killing Hitler, we would probably do something more akin to finding the girl or guy that got away. If this scientific genius was suddenly afforded a parallax view of his own life, would he inevitably attempt to use physics to solve these types of problems? What is the mathematical equation for feelings like jealousy or longing?

It’s this sort of human element existing right below the surface that makes for my favorite science fiction. When the genre engine that drives the narrative is intrinsically linked to the problems of the main character. The conceit is not just an intriguing idea but a metaphor for their emotional conflict. The same could also be said about the best of Film Noir: a complicated (and sometimes utterly convoluted) puzzle actually reveals a street-wise tough guy’s complex psychological underpinnings.

Another thrilling proposition would be combining the design aesthetics of both genres.

Synchronicity draws inspiration from the gritty cyberpunk textures and analog synth sounds of sci-fi movies from the 70s and 80s, as well as the harsh shadows and smokey glamour of postwar crime dramas. I wanted to create a retro-futuristic world that the audience could climb into and walk around inside of. An atmospheric playground where the mysteries of the universe can be explored in the dark unknown of time and space.