Liam Neeson returns as Bryan Mills, the retired CIA agent who stopped at nothing to save his abducted daughter in TAKEN.  When he is targeted by a mysterious figure seeking vengeance, Bryan must employ his “particular set of skills” to protect his family against an army out to kill them. 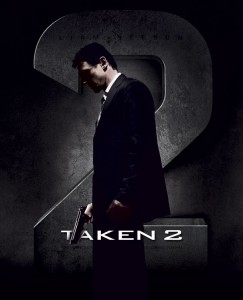 One of the most memorable non-combat action sequences in Taken 2 is a car chase through the streets of Istanbul, with learner-driver Kim behind the wheel. She’s terrified, understandably so, at the prospect of outrunning her pursuers on some of the most densely-trafficked streets in the world.

From acclaimed filmmaker Luc Besson (who co-scripted and produces TAKEN 2), co-screenwriter Robert Mark Kamen, and director Olivier Megaton, TAKEN 2 follows the global success of Taken, released in 2008, which earned $224 million in worldwide box office. Audiences cheered Neeson as Bryan Mills, an overprotective father whose skills – forged through years of covert ops – were put to the test long after his retirement from the CIA.

Resolute in his quest to rescue his daughter, Bryan took extreme measures, making sure her kidnappers paid the ultimate price. Two years later, their family is seeking vengeance against Bryan and his family.

“Taken hit a nerve with people,” agrees Famke Janssen, who plays Lenore. “I think it was the notion that if something happens to a family member, what would you do? How far would you be willing to go?  Audiences really identified with Bryan Mills.”

The role of Bryan was a notable departure for Neeson. Before Taken, he had been celebrated for his work in dramatic fare, like the Oscar®-nominated Schindler’s List.  Taken, a full-throttle action-thriller, was more than just an assignment for Neeson; it fulfilled his childhood ambitions. “The film appealed to the young person in me,” he laughs. “It was a chance to be in Paris for three months and to do fight training, and I love all that physical stuff. It was a great release.”

For Liam Neeson, returning to the character of Bryan Mills in TAKEN 2 meant drawing on the experience gleaned from roles in action films subsequent – and largely due – to his work in Taken.  “When I acted in [the summer 2010 film] The A-Team I met a military weapons expert who is still operational,” he says. “He was a big guy who, while we were shooting, would disappear for four days and come back with a stomach wound, and you knew he’d been on a mission in Iraq or Afghanistan.”