In the years since we last saw John and Ted, they’re both still living the dream in Boston. Although John is now a bachelor, Ted has settled down with Tami-Lynn, the trashy woman of his dreams. As marital problems begin to affect the newlyweds, Ted and Tami-Lynn decide to have a baby in order to save their marriage. 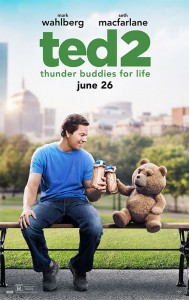 Alec Sulkin jokes that his working title for the sequel was actually rejected. “My idea was Ted 2: More of
Same,” he says, “but I was overruled, and we actually did have to think of a new story.”

Seth MacFarlane returns as writer, director and voice star of Ted 2, the follow-up to the blockbuster that launched the career of the world’s most outrageous bear. Joined once again by Mark Wahlberg[2] as John Bennett. MacFarlane directs the comedy from a screenplay he wrote with frequent collaborators, and Ted 2 executive producers, Alec Sulkin & Wellesley Wild.

When it came to discussions of Ted 2, it was mandatory that the core creative team return. That meant MacFarlane would once again join Ted writers Sulkin and Wild to pen the next chapter. It was an unlikely 19th-century legal inspiration that would move the writing partners to tell the second chapter in Ted’s tale. Wild shares: “Seth was reading a book on the Dred Scott case and came up with this idea: ‘Since Ted is a stuffed animal that came to life, what if he finds out he’s not a citizen? What if he’s not considered a person and just considered property?’”

Cast members new to the series include Academy Award® winner Morgan Freeman as Patrick Meighan, Ted and John’s attorney who is willing to take their case to the highest court in the land. Mad Men’s own John Slattery was brought onto the comedy as Shep Wild, the suave attorney who is fighting
the odd fight to make sure Ted stays property.

Leading off the numerous cameos are New England Patriots’ quarterback and Super Bowl winner Tom Brady as Ted’s potential sperm donor and Dennis Haysbert as Ted and Tami-Lynn’s fertility doctor. They are joined by a who’s who of comedy stars, whose appearances we won’t spoil….

The filmmakers’ desire to create a world in which to place a talking teddy bear was established in the first comedy, and production returned to the city of Boston to film Ted 2. “In Ted, Boston is a character in the movie, and John and Ted are Boston dudes,” says producer Jason Clark. T

he production took advantage of a number of key locations known to locals and tourists alike, including Boston Common with its swan boats, Seaport Boulevard and Boston Harbor. One of the cast and crew’s favorite locations was the “Tom Brady Mansion,” which was filmed at a private home in Norfolk. Additional locations included Marriott’s Custom House in McKinley Square, which is the site of the courthouse where Ted is on trial for his personhood. Built in 1834, it has now been repurposed as a hotel. Union United Methodist Church, home to one of the country’s oldest African-American congregations, is the setting for Ted and Tami-Lynn’s wedding in South Boston.

With their breadth of knowledge, and the learning curve of the first film behind them, the production team brought back as many of the original VFX crew from Ted as they were able to, led by Blair Clark, who cut his teeth at ILM as a model maker on Indiana Jones and the Last Crusade. Clark brings a wealth of experience back to Ted 2.