When John Connor (Jason Clarke), leader of the human resistance, sends Sgt. Kyle Reese (Jai Courtney) back to 1984 to protect Sarah Connor (Emilia Clarke) and safeguard the future, an unexpected turn of events creates a fractured time-line. Now, Sgt. Reese finds himself in a new and unfamiliar version of the past, where he is faced with unlikely allies, including a new T-800 terminator, the Guardian (Arnold Schwarzenegger[1]), dangerous new enemies, and an unex-pected new mission: To reset the future… 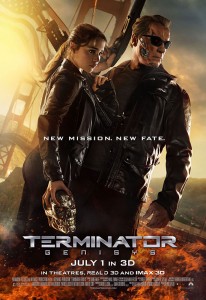 Production called upon Jason Matthews from Legacy Effects to create a silicone replica of the supremely pumped and buff Schwarzenegger circa 1984, outfitted with steel armature and physiologically truthful joints, using measurements and face casts from the time around the shooting and release of the original film. The replica was used when danger prohibited the participation of any live performers, and also during the scenes where the older Arnold meets his younger self in 1984.

The rights under their belts, the Skydance Productions duo began to scout writers for the mammoth project, including writer/producers Laeta Kalogridis and Patrick Lussier. Kalogridis remembers, “David and Dana approached us around Christmas 2012, and our first response was ‘No’, as was our second and third response. We said no because of respect for James Cameron[3]’s universe. I had worked with him for years—he’s an inspiration to me personally and cinematically—and I did not want in any way, shape or form to do anything that would not be respectful of what he had created. ” But Skydance was persistent, so Kalogridis checked with Cameron himself, who not only granted his permission and gave his blessing, but started the ‘idea bouncing’ chain reaction inevitable in any great pre-production phase.

Producer Ellison says, “We knew we had to have a director who cared about character, and the love story of this family. We all pray at the altar of HBO’s ‘Game of Thrones,’ and we thought ‘Thor: The Dark World[4]’ was phenomenal. And, sure enough, when Alan came in, he said that we could talk about what the Terminators are going to look like, and how many of them there are, and the different types, and how the third act fight is going to look, but the love story and relationships have to work. He said that in our first meeting, and we thought, ‘Okay, this is the right guy.”

First on the roster, the title character himself, brought to iconic life again by Arnold Schwarzenegger[1]. “I was very happy to be involved,” admits Schwarzenegger. “I got a phone call telling me that David and Megan Ellison had acquired the rights and the first thing I thought was, “Finally they are doing another one!”

As the Guardian’s de facto daughter, Sarah Connor, filmmakers chose Emilia Clarke for the role. “We go back a long way,” smiles Taylor, clearly happy to be working with his Game of Thrones star again.

The chemistry between Sarah and Reese was at the forefront of producer Goldberg’s mind when filmmakers began to audition actors for the part. She says, “We’d done the movie ‘Jack Reacher’ with Jai Courtney and loved him as a person, and thought he was a wonderful actor. We weren’t sure he was Reese. He came in and he tested with Emilia, and I remember standing on the stage watching his audition, and I emailed someone and said, ‘We just found our Kyle Reese.’ It was clear their first read together.”

Casting the part of John Connor—particularly for this John Connor, whose character runs the gamut from messianic to maniacal—was an acknowledged challenge among filmmakers. “We think people are going to be blown away by Jason Clarke in this movie.”adds Goldberg.

The weeks prior to the start of principal photography for “Terminator Genisys” saw the talent entering the arena of training—the very physical shooting schedule included stunts, fights, heavy wirework and…weapons. Emilia Clarke jokes, “Yeah, there was training every day with guns, lots of guns, and then some more guns, and then a few more guns thrown in. ”

The final ‘hero’ endoskeleton took a crew of about 15 artists a little over a month to complete and boasted of more than 260 separate pieces, all sculpted by hand. And thanks to such advances as the 3D printer, duplicates could be created in a more post-Millennial manner.

Producer David Ellison says, “This is the largest scale Terminator movie that’s ever been made. There are bigger action sequences in Genisys than any prior Terminator film. You’re going to see the fully rendered future war, which nobody has ever been able to do yet, and you’re going to see new Terminators. We have set the bar incredibly high, and we’re going for it.”