Written and directed by Tom Gormican, That Awkward Moment is about the vulnerability and embarrassment of navigating modern-day relationships, uniquely told from the point of view of the three guys. The film stars Zac Efron, Miles Teller, Michael B. Jordan, Imogen Poots, Mackenzie Davis and Jessica Lucas. The R-rated comedy is about three best friends who find themselves where we have all been—at that confusing moment in every dating relationship when you have to decide “So…Where is this going?” 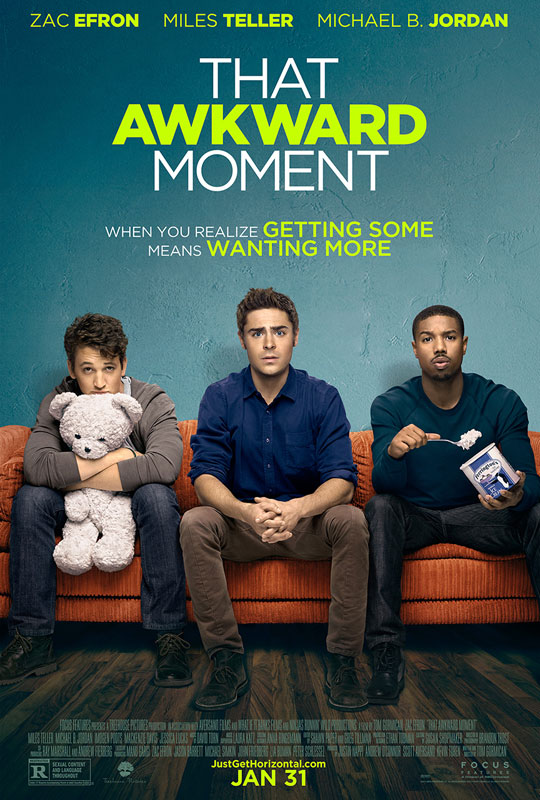 The craziness starts with the pact, as the three friends pledge to foreswear serious relationships and stay single for as long as possible. But the agreement, which was meant to keep life simple for them, quickly makes things more complicated, as each finds himself at a crossroads in his life that he never saw coming.

Gormican penned the screenplay because he was interested in the idea of making a romantic comedy with a twist—the story would be told from the guys’ point of view. Using his years as a young, single New Yorker as a jumping off point, Gormican spun a story about three very different 20-somethings enjoying life in the big city while trying make their marks professionally and socially.

The project took a huge leap forward when Zac Efron became involved. He learned about it from producer and Treehouse Pictures President Justin Nappi, with whom he had worked on the 2012 family drama At Any Price.  While travelling together in France, Justin pitched Zac on the idea of a classic rom-com seen from a uniquely male perspective. Efron not only signed on to star in the film but also joined as an executive producer while the script was still in development.

The cast of That Awkward Moment boasts four of Hollywood’s hottest young actors: Zac Efron, who earned international stardom in Disney’s High School Musical franchise and has gone on to tackle challenging adult fare. Efron, who plays Jason, the guys’ unofficial ringleader, initially attracted Gormican’s attention in the 2009 teen comedy, 17 Again. “Zac is a really magnetic performer,” says Gormican. “When he’s on screen, you can’t stop watching him. He’s one of the most charming movie presences I’ve run into. It’s very difficult not to like him.”

Casting Teller in the role was a no-brainer, says the director. “I love his sense of humor, I love his delivery and I love his style. I love the fact that he is absolutely and totally the most prepared person. I tried to keep a pretty firm hand on the script, with some rewriting as I went, but Miles was always able to hammer in a line or two. That’s inevitable—you can’t stop him.” The actor describes his character as the kind of guy who signs up for J-Date—even though he’s not Jewish.

Michael B. Jordan, who plays Mikey, has carved out a niche for himself as a talented dramatic actor, but That Awkward Moment is his first foray into big-screen comedy. “Michael B. can break your heart on screen,” says Gormican.

The fact that the young actors all became close prior to filming helped their onscreen chemistry, according to Gormican. “We didn’t have a ton of rehearsal time,” he says, “but we were able to take the cast away for a long weekend in the Adirondacks, where they became friends, whether they meant to or not. We read through the script once or twice, but it wasn’t about rehearsing. After four days, we came back with a lot of stories to tell and a shared experience, which was really helpful.”

“This was the most fun I’ve ever had filming a movie,” says Teller. “We’re hot dudes. We’re filming in New York. How could it not be fun? ”