In 2010, the eyes of the world turned to Chile, where 33 miners had been buried alive by the catastrophic collapse of a 100-year-old gold and copper mine. Over the next 69 days, an international team worked night and day in a desperate attempt to rescue the trapped men as their families and friends, as well as millions of people globally, waited and watched anxiously for any sign of hope. 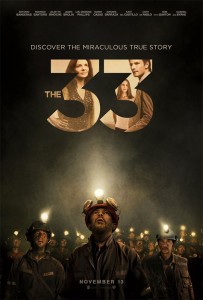 Production designer Marco Niro relied on archive footage and photographs of the real Refuge in re-creating the space in which the 33 lived for so many weeks.

Producer Mike Medavoy felt a special connection to the story having lived in Chile for ten of his formative years. He first met with a group of the Chilean miners when they visited Los Angeles shortly after their rescue. As they began sharing their personal stories, Medavoy recalls, “The clock turned back to when I was 17. It reminded me of the generosity of spirit and humor of the Chilean people.”

The men, having already been told of the fame that awaited them above, had formed a united front, agreeing to collectively tell their story to a single writer. They chose Pulitzer Prize-winning author Hector Tobar, whose resulting book, Deep Down Dark, became a critically acclaimed New York Times bestseller. It also became part of the basis of the screenplay for “The 33,” written by Mikko Alanne, Craig Borten and Michael Thomas, from a screen story by José Rivera.

Alanne notes, “There were several challenges we had to solve in crafting the screenplay: how to divide 69 days in a two-hour film; which of the miners to focus on while still representing all 33; and, of course, how to maintain the dramatic tension when the ending is so well-known.”

“Patricia was the perfect choice to direct this film,” Medavoy concurs. “She is one of a few women directors working today and, being from Latin America, she had such a heart for the material.” Director Patricia Riggen states, “This movie is about being trapped and alone and facing death, but it is equally about having faith.”

Antonio Banderas, who stars as the de facto leader of the miners, Mario Sepúlveda, remembers following the events as they unfolded on television. Banderas says he was fortunate to spend time with the real Mario, observing, “He’s an unbelievable survivor and motivator. If I ever get lost without any resources, I would love to have a Mario Sepúlveda with me. He knows how to get out of a tough situation and not lose control, and he’s got a great sense of humor, which is important, too,” he smiles.

“This movie is life-affirming,” echoes Lou Diamond Phillips best known to audiences worldwide for his breakout performance as Ritchie Valens in the 1987 smash hit “La Bamba”, who stars as miner Luis Urzua.

“The 33” was filmed entirely on location, eschewing soundstages and studio-built sets for the visceral reality of two underground mines in Colombia and the stunning vistas of the Atacama Desert in Chile. The stark contrast between the settings is reflected organically through darkness and light, which Riggen and cinematographer Checco Varese applied both literally and symbolically. “Without light, there is no life,” Riggen clarifies. “Light and shadows help tell the story from a physical standpoint, but also from an emotional one.” Varese notes, “We shot in the darkest place you can imagine, in real mines deep below the surface of the Earth. Then we moved to one of the brightest places on the planet, the Atacama Desert. It was an interesting challenge and a beautiful dichotomy.”