Having miraculously remained 29 years old for almost eight decades, Adaline Bowman (Blake Lively) has lived a solitary existence, never allowing herself to get close to anyone who might reveal her secret. But a chance encounter with charismatic philanthropist Ellis Jones (Michiel Huisman) reignites her passion for life and romance. 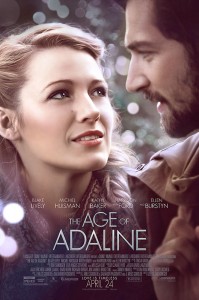 To create a character that was beautiful and ageless, but had been around for 100-plus years, Krieger used his grandmother as an inspiration.

Actress Blake Lively, who plays Adaline Bowman, knew she had found an enchanting adventure and timeless love story the first time she read the script. “I couldn’t put it down,” she says. “It read like a beautiful novel. The story is romantic, poetic and unique.”

The film’s director, Lee Toland Krieger, made a splash in Hollywood with his previous features, The Vicious Kind and Celeste and Jesse Forever. Krieger had read the screenplay for the first time a few years earlier and it stayed with him. “The essential theme of the film was so attractive,” he says. Krieger won the producers over with a fully realized vision for the film he wanted to make. “I could tell he was a real artist,” says producer Tom Rosenberg.

Adaline life begins to open up after a chance meeting with Ellis, a dynamic young entrepreneur, played by Michiel Huisman, who sweeps her off her feet. Krieger wanted to make sure that the character—a good-looking tech millionaire—didn’t come off as a smug, nouveau-riche hustler. The love story between Adaline and Ellis was irresistible for Huisman, and he found the unusual premise attractive. Harrison Ford plays Ellis’s father, William, a college professor. Lively admits she was a little nervous to meet the Oscar®-nominated actor she says. “Maybe I should not have watched the Indiana Jones trilogy before shooting. He is a brilliant actor, and true personal hero.”

Academy Award®-winner Ellen Burstyn plays Flemming. “Ellen Burstyn is one of the finest actors to have ever graced the screen,” says Krieger. Rounding out the cast is up-and-coming Canadian actress Amanda Crew, whose previous roles include Charlie St. Cloud (opposite Zac Efron) and the Emmy®-winning HBO series Silicon Valley. As Ellis’s sister Kikki, Crew joins the family as they gather to celebrate her parents’ anniversary and meet Adaline, her brother’s new love.

The Age of Adaline meticulously moves through the 20th century, recreating visual highlights from each decade with researched images and objects, including fashions that evoke past and present in equal measure. From sumptuous formal gowns to everyday work clothes, everything Adaline wears was carefully selected and designed by costume designer Academy Award®-winner Angus Strathie and his team with an eye toward both fashion and storytelling.

Krieger brought in cinematographer David Lanzenberg, with whom he has worked exclusively for the past seven years, to help create the film’s signature visuals. A former fashion photographer, Lanzenberg balanced highly developed technical skill with an eye for beauty. The enormous visual and historical scope of the film required a great deal of research, according to production designer Claude Paré.

Every object in every scene was extensively documented, according to Paré. “We wanted to make all the period pieces exquisite, like little diamonds. They all have their individual texture.”