When an all-star, multi-generational cast led by Robert De Niro, Katherine Heigl, Diane Keaton, Amanda Seyfried, Topher Grace, Ben Barnes, Susan Sarandon and Robin Williams gathers together for The Big Wedding, you can bet a hilarious family fiasco is about to ensue. 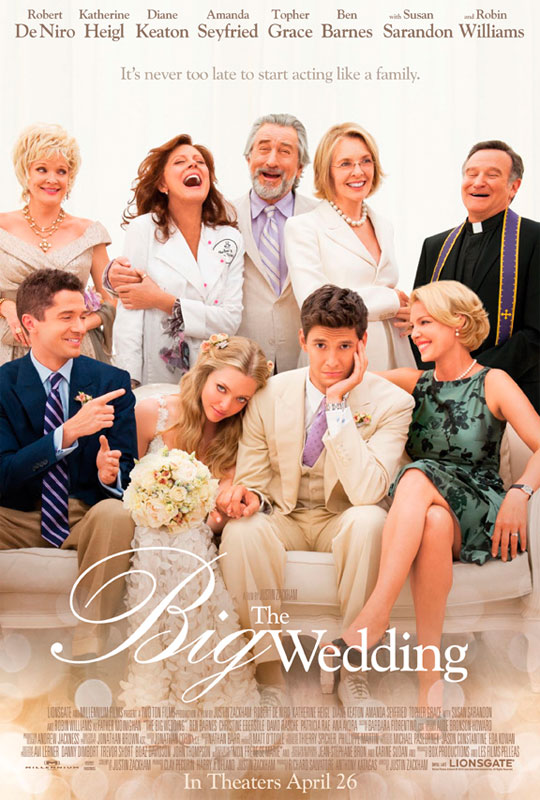 Robert De Niro was drawn to the project from the get-go. “I liked the character and I liked Justin Zackham and I knew Diane Keaton was going to be in and I thought that would be great,” he recalls.

The film’s cast of actors, accomplished in both comedy and drama, was drawn to a modern wedding story with a screwball twist: a family in the perilous, hilarious situation of pretending to be something they’re not, and discovering who they are in the process.

It all started when screenwriter-director Justin Zackham saw the French-Swiss comedy Mon Frere Se Marie (My Brother Is Getting Married).

The comic possibilities of the film’s concept – a long-divorced couple is asked by their adopted son to pretend to still be happily married for the sake of his biological mother – hit home instantly with Zackham.  He loved the circular idea that the harder a divided family tries to keep up the appearance of blissful perfection, the more their conflicts start bubbling to the surface . . . and the more you get to really see what really holds them together underneath all the friction.

When Zackham’s childhood friend and long-time producing partner Clay Pecorin read the screenplay, he was moved by the recognizable characters, but found a great deal of humor in it as well.

“It’s a very funny script,” Pecorin says.  “I’m married, and have been to several weddings, so I know how they can become train wrecks.  Everybody gets freaked out. You’re putting together families who don’t know each other, who might not really like each other, but they all have to figure out how to be together, and all of that comes out in a hilarious way in this story.”

Bringing The Big Wedding to life was, in many ways, a lot like planning an actual marriage ceremony – and, like any good wedding, a lot of the atmosphere depended on the people behind the scenes.  Working closely with Zackham was an accomplished crew including director of photography Jonathan Brown, ASC, production designer Andrew Jackness and costume designer Aude Bronson-Howard.  They all convened in Connecticut to make every detail as vivid – and in synch with the comedy – as possible.