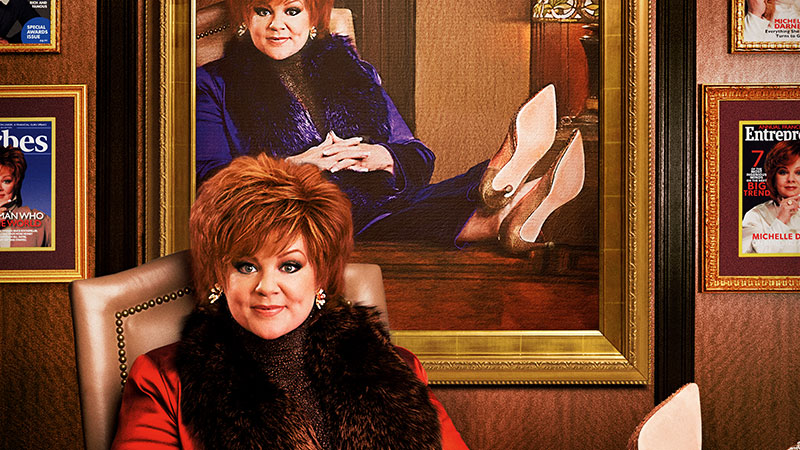 Melissa McCarthy, whose pitch-perfect timing and deceptively effortless physical comedy has helped to rocket Spy, The Heat, Identity Thief, Tammy and Bridesmaids to blockbuster status, stars as Michelle Darnell, a titan of industry who is sent to prison after she’s convicted of insider trading. She emerges ready to rebrand herself as America’s latest sweetheart and reestablish herself as the doyenne of finance, but not everyone she steamrolled is so quick to forgive and forget. 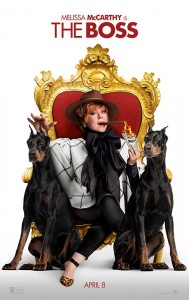 The role of Michelle’s nemesis was one that McCarthy and Mallory secretly wrote with Peter Dinklage in mind…not sure that he would ever seriously consider it. Filming took place during Dinklage’s hiatus from Game of Thrones, so the producers adjusted the production schedule and moved it to the first weeks of filming. The hitch was an intricately choreographed fight sequence between Dinklage’s and McCarthy’s characters, the culmination of the third act arc would be filmed before all of their preceding dialogue scenes.

The role of Michelle’s nemesis was one that McCarthy and Mallory secretly wrote with Peter Dinklage in mind…not sure that he would ever seriously consider it.

Melissa McCarthy, Ben Falcone and Steve Mallory met almost 15 years ago at The Groundlings, the Los Angeles-based improv troupe. “So many great characters have been born at The Groundlings.  For me, that character was Michelle Darnell,” remarks McCarthy. “I loved her so much that I couldn’t let her go and would randomly bring her up and talk about her over the years.”

The catalyst for transforming her Michelle Darnell comedy sketch into the feature film screenplay that would become The Boss was the onset of the Writers Guild of America strike in late 2007.  With TV production halted, McCarthy and Mallory had time to sit down in their favorite coffee shop to spitball ideas from the numerous characters they had workshopped.  They kept returning to the big-talking, ball-busting red head and drew up an outline of multiple story points for her.  Indeed, some of their original ideas would be folded into the shooting script.

They began the process of writing the story around the avaricious money mogul with a surprising heart.  Numerous incarnations would follow with Falcone, McCarthy’s husband and their writing partner, jumping into the fray.  But throughout the process, the heart of their story remained the same: the reinvention of a seemingly irredeemable financier who proves to have quite the soft spot for those she loves.  Well, sort of.

Producers Will Ferrell, Adam McKay and Chris Henchy, along with executive producers Kevin Messick and Rob Cowan, previously collaborated with Falcone and McCarthy as producers on the hit comedy Tammy, which marked Falcone’s directorial debut and starred McCarthy.   It was an experience that left all of them wanting to do it again and as the project came together at Universal, the Gary Sanchez Production principals signed on as producers. Henchy was drawn to the indelible Michelle Darnell and upon viewing an early Groundlings clip of McCarthy on stage performing the sketch, it only reinforced the decision to partner up.

McCarthy is the first to admit that she gravitates towards flawed anti-heroines, as with their peccadillos comes opportunity for empowerment.  “I dare you to try make a movie with Melissa McCarthy in your cast without a strong female point of view,” states Mallory.  “Melissa has a very strong point of view about playing women on film and television.  They shouldn’t be perfect, and they should be as flawed as their male counterparts but still have the ability to change.  That’s how you find balance with that imperfection.”

Caught in the eye of Hurricane Michelle is Claire, the titan’s intelligent, beleaguered assistant.  Portrayed by Kristen Bell, Claire is a single mother who, while a bit reserved, is fully equipped to deal with her boss’ outrageous demands. “The hardest job in comedy is to be the straight person,” says Mallory, “which Kristen is as Claire. ”

That philosophy sowed its seeds in the cast’s youngest member, 11-year-old Ella Anderson, who plays Claire’s daughter, Rachel.  She states: “It was just so cool to watch Melissa on set as an actress, producer, and writer.  It has been inspiring.  I want to go to college to study film and continue acting, so I can someday produce and direct.”

Mike is portrayed by Tyler Labine. Says the performer of his roller-coaster ride of excitement when faced with the opportunity to work with McCarthy and Bell: “I don’t want to dork out too hard, but I feel like I jumped into another league with these guys. ”

Oscar® winner Kathy Bates, who previously worked with Falcone and McCarthy on Tammy and has guest starred on her hit television series Mike & Molly, welcomed the opportunity to work with McCarthy again…especially for the role of self-serving magnate Ida Dell Marquette, Michelle’s mentor and dubious role model—for both her personal and business life.

Although The Boss is set in the bustling city of Chicago, hometown to both director Ben Falcone and Melissa McCarthy, cast and crew would film for two months in Atlanta before traveling to the Windy City to film a variety of exterior locations with McCarthy, Bell, Anderson and Yarbrough. The versatility of Atlanta’s urban and suburban landscapes allowed the filmmakers to re-create all aspects of the material—from modern glass high-rise buildings for Renault and Michelle’s classically opulent corporate headquarters to the Gwinnett Arena, which hosted a rousing day of filming for Michelle’s spectacle “Unleash the Power” seminar.  Then it was off to the tree-lined blocks of brick townhouses in Southeast Atlanta for key sequences with the Darlings.

Cast and crew would then travel to Chicago for the last week of shooting.  The city’s more iconic sites—downtown, Millennium Park, Wrigleyville and U.S. Cellular Field—would provide the backdrop for filming of various and sundry exterior scenes.