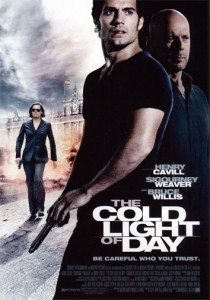 The Cold Light of Day follows Will Shaw (Henry Cavill) who got to Spain for a weeklong sailing vacation with his family, the stressed young business man is not in a holiday mood. His startup company just went under and his tense relationship with his disciplinarian father Martin (Bruce Willis) only makes matters worse.

But when the family is kidnapped by what turns out to be intelligence agents hell-bent on recovering a mysterious suitcase, Will suddenly finds himself on the run. His whole world turns upside down when Martin reappears, revealing he is an undercover agent tangled in an intergovernmental web of lies and secrets. During a clandestine rendezvous, Martin is killed by a sniper, and Will must find a way to get the rest of his family back alive.

With the kidnappers counting down the hours, the Spanish police breathing down his neck for a murder he didn’t commit and a cadre of U.S. assassins on his trail, Will flees through Madrid, racing to piece together a conspiracy as labyrinthine as the city’s ancient streets.

Who can he trust? Who killed his father? And where is the mysterious suitcase that seems to the key to getting his family come safely? In his quest for answers, Will finds Lucia (Veronica Echegui) – a half-sister he never knew he had, who is determined to help him. Bound by their shared kiss, the siblings are a force to be reckoned with, but can they overcome the massive odds against them before it’s too late?