From the writing-directing team Marcus Dunstan and Patrick Melton (Saw IV, V VI and 3D) comes The Collection, a suspense horror film with nonstop thrills at every turn.  Directed by Dunstan and starring Josh Stewart (The Dark Knight Rises, The Collector), Emma Fitzpatrick (The Social Network) and Christopher McDonald (“Boardwalk Empire,” Requiem for a Dream), the film centers on a traumatized man forced to help rescue a beautiful woman who has become the latest obsession of a crazed killer who “collects” humans in a booby-trapped house of horrors. 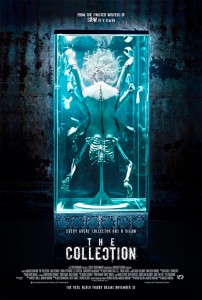 When it came to casting The Collection, the filmmakers already had their leading man, Josh Stewart, in place.

It may come as a surprise that a movie as frightening as The Collection has its roots in a gentler time in cinematic history—specifically in the 1967 Terence Young-directed Wait Until Dark, starring Alan Arkin and Audrey Hepburn. The inspiration comes from the groundbreaking suspense-thriller, where Hepburn plays a blind woman who is terrorized by a trio of thugs searching for a heroin-stuffed doll they believe is in her apartment.

Over four decades later, writer-director Marcus Dunstan and his longtime writing partner, Patrick Melton, took the basic elements of that story and re-worked them into what became the 2009 crime-horror hit The Collector, the forerunner to The Collection. In homage to Wait Until Dark, the writers even named their male lead Arkin, after Alan Arkin, and gave their female lead, Elena, a physical disability of her own: she’s hearing impaired.

But they also added an all-important twist to the home-invasion sub-genre that carries through both films, explains Dunstan. “What happens when a thief interrupts the crime of a far more nefarious man? That’s the DNA of the first film. You have Mr. Bad versus Mr. Worse, and Mr. Bad all of a sudden becomes so much more relatable. When you see a street criminal go against a horror-movie villain, the street criminal becomes an anti-hero with absolute titanium for blood—I love the feeling of that. Those were the types of films I enjoyed when I was young.”

The Collection follows the story of the traumatized Arkin (Josh Stewart), last seen trapped in a small red trunk, who is coerced into leading a band of trained fighters on a mission to rescue Elena (Emma Fitzpatrick) from the clutches of a crazed killer. The title alludes to the killer’s penchant for “collecting” and mutilating humans for display in an abandoned hotel he’s turned into a museum of death.

The filmmakers decided to kick-start the action—and the bloodletting—almost from the first scene. “The challenge storytelling-wise was to learn about the characters while the terror was unfolding,” Dunstan explains. “There wasn’t a calm environment at all to get to know these people.”