Reprising their roles, Oscar nominee Vera Farmiga (“Up In the Air”) and Patrick Wilson, star as Lorraine and Ed Warren, who, in one of their most terrifying paranormal investigations, travel to north London to help a single mother raising four children alone in a house plagued by malicious spirits. 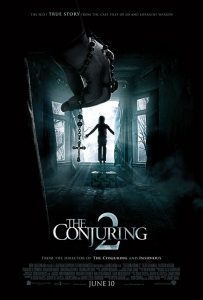 The tracking shots are representative of the way James Wan directs, doing as much as he can in camera, including as many effects as possible, relying on CG only when necessary. Wan was very specific regarding the design of Janet and Margaret Hodgson’s bedroom, which was inspired by the photos taken by then Daily Mirror photographer Graham Morris.

At 6:45 a.m. on September 21, 2015, fifteen minutes prior to the official start of principal photography on “The Conjuring 2,” Father Steven Sanchez of Albuquerque, New Mexico—a Roman Catholic Church-sanctioned exorcist and personal friend of demonologist Lorraine Warren—began a blessing of the production before cast and crew on Stage 4 of the Warner Bros. Studios lot in Burbank, California.

Father Steve then extended an invitation for a personal blessing to anyone in attendance. Afterward, he moved through the stage using holy water and anointing oil to bless each room that comprised the main set; making a movie about a documented possession, the filmmakers took no chances.

Then, and only then, did filming begin.

In 1970, the Warrens battled a malevolent presence that permeated a remote farmhouse in Harrisville, Rhode Island—a case brought to the screen in 2013 in Wan’s hugely successful “The Conjuring.” Then came the most highly publicized case of their careers, Amityville, which would nearly destroy them.

Writer/director/producer James Wan seeks to terrify moviegoers once again with his depiction of another highly publicized case involving the real-life horrors experienced by paranormal investigators Ed and Lorraine Warren with “The Conjuring 2.”

It’s late 1977 when, with the effects of Long Island still haunting them, the Warrens come out of a self-imposed sabbatical and travel to northern London to take on a vile demonic entity that has taken root in the home of the Hodgson family, in the populous borough of Enfield. What is thought by many to be a hoax will become the most documented case in paranormal history. “Everything Ed and Lorraine have been through since we met them in the first film has been leading up to Enfield,” Wan states.

Returning in their roles as Lorraine and Ed are Vera Farmiga and Patrick Wilson.

Producer Peter Safran felt that the Enfield scenario provided a natural successor to the story in the first film, due in part to its being “one of the best-known examples of documented supernatural possession, but also because the circumstances would allow us to make sure the film had a dissimilar look and feel from the first. 1977 London—the miners’ strikes were going on, it was the birth of the punk movement—was a really different environment for the Warrens.”

Perhaps the most frightening peculiarity seen in “The Conjuring 2” is that this time, the family aren’t the only ones the possessing entity focuses on…whatever it is, it attacks the Warrens directly, too, causing both Ed and Lorraine to fear for each other as well as for the Hodgsons. Prior to the arrival of the Warrens, the Hodgson home had also been frequented by German parapsychologist Anita Gregory, played in the film by Franka Potente, and British paranormal investigator Maurice Grosse, portrayed by Simon McBurney. But it was the Warrens that would make the greatest impression on, and the biggest difference to, the family.

“When Ed and Lorraine came to the house, to me it felt like some sort of comfort had arrived for the first time, in that they’d come to try and help us,” says Janet Hodgson Winter, the real-life woman who suffered the most in the Hodgson family as a young girl of just 11 or so. The primary target of the possession, she served as a consultant on the film.

“‘There’s definitely something in this house, Lorraine said,’” recalls Margaret Hodgson Nadeem, Janet’s older sister and also a consultant, of Lorraine and Ed’s initial visit. “We told her everything that had happened and how it started and that it was still going on, we couldn’t get rid of it, and she said, ‘I’ve seen these things before, I’ll do my best to try and help you.’”

To adapt the numerous real-life events for the big screen, Wan worked alongside writers Chad and Carey Hayes, who wrote “The Conjuring” and were keen to revisit the Warrens’ world once again, and screenwriter David Leslie Johnson.

“This was the first time I’ve ever worked on a script that was based on a true story,” offers Johnson, who had been eager to work with Wan for some time.

Though Wilson never got to meet Ed Warren, who passed away in 2006, the actor says, “I’ve been able to spend time with Lorraine so I know him through her eyes, and through Judy and Tony Spera, their daughter and son-in-law, as well as DVDs, audio recordings and so forth. On this one we were even more proactive about finding those character-defining moments in his life that we could put on screen.” One such character trait found its way into the first scene Wan wrote for the film, which became known as the “Elvis scene,” a lighter moment in which Ed sings a song to the Hodgsons.

Frances O’Connor, who portrays the overwhelmed Peggy, says, “She’s a single mum with four kids living in a council house, so at the start of the film, life’s already pretty tough. Pretty quickly some small, paranormal things happen and Peggy is so stressed she doesn’t even see that it’s there.”

O’Connor was aware of the incidents at the Hodgson home at the time they occurred. “I’d read the stories and seen those pictures of the girls levitating, that kind of thing, and found it quite terrifying. There was a lot of documentation. So when the script came to me, I was interested in telling that story.” Wan says he “knew straightaway that I wanted Frances O’Connor for this role. I’ve been a big fan of her work, all the way back when I lived in Australia. I knew we needed someone as talented as Frances to embody Peggy’s strength, her internal conflict, her desperation.”

While the filmmakers seemed to have quickly achieved their dream cast insofar as the adult leads went, Wan admits, “I think the hardest role to cast was Janet Hodgson, to find a young actress who could really capture the vulnerability of what this 11-year-old girl went through, and I’ve got to say, we are so fortunate to have found Madison Wolfe.”

In addition to acting, Wolfe is a cheerleader and a gymnast, both of which assisted tremendously with the physical demands of the role. Her favorite scene required a good deal of energy—and speed. “It was one continuous shot, and the camera started on me sleeping in the chair, and then Frances comes downstairs and she helps me up to bed. Then the camera panned to the window and it started raining, and then it was supposed to turn into daytime and the camera backs up and there was me on the sofa. I had to go upstairs, put a robe on, change, run back downstairs and then get on the sofa before the camera came back to me, so the timing had to be perfect. It was really cool,” she smiles.

Margaret, Janet’s elder sister, is played by Australian actress Lauren Esposito. “Margaret’s very protective of Janet, especially when she starts to get possessed and all these crazy things happen,” she observes. Esposito remembers her scariest moment on set as “when the drawer comes toward Janet and Margaret and smashes into the door. It was quite scary because it seemed like it was an inch away from actually hitting me.” Since the role required a good deal of screaming, Esposito wisely kept a water bottle close by, “and some tea with lemon or honey—anything to help my throat!”

The Hodgson boys were both played by young actors found in London. Patrick McAuley plays Johnny Hodgson, the older of the two, and Ben Haigh plays the youngest, Billy, who is troubled by a speech impediment. Haigh had to learn to stutter, as well as alter his accent to one slightly different from his own as the story takes place in North London.

Thanks (most likely) to Father Steven’s blessing of the soundstage prior to the cameras rolling, the cast and crew experienced far fewer “unusual” occurrences than on the first film, though there were a few odd happenings before and during production: doors opening on their own, items going missing, shadowy figures seen or felt when no one was actually there, and lights going out unexpectedly.

Even in London, during the casting process, several sessions were interrupted numerous times by a loud scratching noise thought to be coming from under the floorboards of the converted Victorian print house. The agents chalked it up to mice, though none was ever found and the sounds were a bit too loud to come from tiny vermin. Or perhaps a dog in the adjacent studio? No, there was none. Curiously, the scratches were not heard again once casting on “The Conjuring 2” was completed.

Because the type of council house that served as the Hodgson home in Enfield was a very tight living space, the production team recreated it on the Warner Bros. lot in order to make it more filmmaking-friendly.

For a variety of reasons, the filmmakers chose not to use the actual house where the events in Enfield unfolded as the physical model for the Hodgson House in the film, although another, similar-looking house in Enfield was eventually settled upon. Once it was chosen, construction began on Stage 4, which is one of the oldest stages on the lot, built in 1926, and also one of the most haunted. Many believe that the spirits that inhabit the catwalks on Stage 4 are ghosts of former Warner Bros. crews and that they are mischievous but benevolent practical jokesters. Oftentimes the nighttime maintenance crews won’t go out on the roof without someone staying inside, because the ghosts like to lock them out, and some crews have claimed to hear whispering, hammering and drilling when no one on the stage was constructing any sets.

Wan and Berghoff have worked together many times, so she was hardly surprised when the director asked her to build a two-story house authentic to the era but inside a soundstage, so that he could literally follow the actors up and down stairs.

“This was my fifth film with James and he pushes me in interesting directions and inspires me,” Berghoff says. “Any time he takes a project, I know there are going to be lots of twists and turns that allow me the creative freedom to push the limits in many different directions.” Berghoff’s team built a two-story set encompassing three houses from the model street in Enfield, plus the front, walled gardens, sidewalk and part of the street, as well as the backyards.

For practical purposes ranging from giving the construction crew time to turn the Hodgson House set on Stage 9 into the Nottingham House, to not being able to effectively cheat certain London locations, the production shot in limited local locations in both Los Angeles and London. The scene in which Ed and Lorraine arrive in London and meet Maurice Grosse for the first time were filmed at the Marylebone Railway Station and required hundreds of extras and a dozen picture cars for authenticity.

“The Conjuring 2” is the sixth film collaboration between composer Joseph Bishara and James Wan (as either director or producer); Bishara also coached Patrick Wilson on the guitar for the scene in which he plays an Elvis song to the Hodgson family.