The Conspirator is a 2010 American film directed by Robert Redford. It is the debut film of the American Film Company. 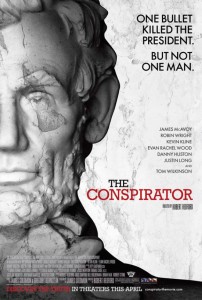 Principal photography began in October 2009, in Savannah, Georgia and wrapped in December 2009.

A riveting thriller, The Conspirator tells a powerful and true story about America then and now. The film is directed by Robert Redford from a script by James Solomon and is being produced by The American Film Company in association with Wildwood Enterprises. In addition to JAMES McAVOY and ROBIN WRIGHT, the film features a stellar ensemble cast comprised of KEVIN KLINE, EVAN RACHEL WOOD, TOM WILKINSON, ALEXIS BLEDEL, DANNY HUSTON, JUSTIN LONG, COLM MEANEY, and JAMES BADGE DALE

In the wake of Abraham Lincoln’s assassination, seven men and one woman are arrested and charged with conspiring to kill the President, Vice President, and Secretary of State. The lone woman charged, Mary Surratt (ROBIN WRIGHT), 42, owns a boarding house where John Wilkes Booth (TOBY KEBBELL), 26, and others met and planned the simultaneous attacks. Against the ominous back-drop of post-Civil War Washington, newly-minted lawyer, Frederick Aiken (JAMES McAVOY), a 28-year-old Union war-hero, reluctantly agrees to defend Surratt before a military tribunal. Aiken realizes his client may be innocent and that she is being used as bait and hostage in order to capture the only conspirator to have escaped a massive manhunt, her own son, John (JOHNNY SIMMONS). As the nation turns against her, Surratt is forced to rely on Aiken to uncover the truth and save her life.

The Conspirator premiered at the Toronto International Film Festival on September 11, 2010. A few days after its screening, the film was acquired by Lionsgate and Roadside Attractions for distribution. The film was released theatrically on April 15, 2011.

The film performed poorly at the box office grossing only $3,506,602 during its opening weekend. After its initial run, the film grossed $11,538,204 domestically with a worldwide total of $15,478,800. Because the film had a budget of $25 million, the film is considered a box office flop despite the fact that its widest release was in 849 theaters.