The Croods is a 3D comedy adventure that follows the world’s first modern family through the journey of a lifetime. When the cave that has always been their home is destroyed – with the rest of their world not far behind it – The Croods are forced to set off on the first family road (or path) trip. The Croods features the voices of Nicolas Cage, Ryan Reynolds, Emma Stone, Catherine Keener, Clark Duke, and Cloris Leachman. 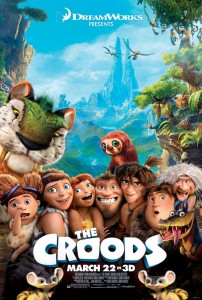 Another key theme in THE CROODS is change and the inherent humor of trying to do things for the first time.

Producer Kristine Belson expands upon the idea that the Croods, despite having lived a long, long, long time ago, are not dissimilar to families today.

“The physical comedy was always there in the film’s development,” says writer-director Chris Sanders. Adds writer-director Kirk DeMicco: “Everyone can find an access point into the movie and relate to one or more of the characters and say, ‘Oh, I know those people, even though they’re not really like my family.’… But we all know they really are,” he admits with a smile.

While the characters, family dynamics, and action take center stage, the filmmakers envelop the Croods in a landscape that however wondrous and exotic, is always relatable.  A pre-production excursion to Zion National Park in Utah inspired the creation of environments (in the film’s first act) that are very much of our planet, but at the same time intriguingly unexpected.

“The Croods is accessible because it takes place in a world not unlike the one we inhabit now,” says Ryan Reynolds.