With Chicago on the verge of an all-out civil war, Tris (Shailene Woodley) leads Four (Theo James), Christina (Zoë Kravitz), Peter (Miles Teller), Tori (Maggie Q) and Caleb (Ansel Elgort) on a harrowing escape from the walled city, chased by armed guards loyal to self-appointed leader Evelyn (Naomi Watts). Outside Chicago for the first time in their lives, the five find themselves being pursued by Edgar (Jonny Weston) through a toxic wasteland known as the Fringe before being rescued and escorted to the ultra-high-tech compound of the Bureau of Genetic Welfare. 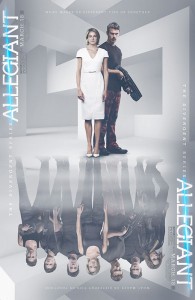 As the final installment of the Divergent book series, Allegiant set a HarperCollins pre-order sales records record prior to its publication in 2013 and sold 455,000 copies on its first day. Collectively, the trilogy has sold more than 37 million copies and spent months atop the New York Times, Apple’s iBooks and Amazon best-seller lists.

Reteaming for their third film together, Woodley and James had no problem generating plenty of on-screen sparks. “When you know the person you’re doing scenes with, it helps the chemistry,” says James.

“After two hit movies, we’ve seen a lot of Chicago and spent time with all the different factions, so we believed the filmmakers, the audience and the actors were all ready to go to a different world,” says producer Douglas Wick. “Cinematically and story-wise, it feels great to go over the wall for some answers: What’s outside the city? Why do the factions exist? Who’s behind it all? What does being Divergent truly mean?”

The Divergent Series: Allegiant builds on the dystopian mythology introduced by Veronica Roth in her spectacularly popular first novel Divergent. For 200 years, citizens living inside the walled city of Chicago have been divided into five factions: the selfless Abnegation, the brave Dauntless, the intellectual Erudite, the truthful Candor and the peaceful Amity, while the unaffiliated Factionless live outside the system.

Devoted Divergent readers  turned out en masse for Summit Entertainment’s first two film adaptations, helping fuel worldwide ticket sales of $586 million. To satisfy expectations for the trilogy’s fan base, filmmakers decided to divide the 544-page third and final installment of the trilogy into two separate films, with the climactic Ascendant set for release in 2017.

“The sheer expansiveness of the storytelling in Veronica’s book lends itself to being broken into two different movies,” says screenwriter Bill Collage. “When she wrote Allegiant, Veronica Roth had her brain in high gear.”

Principal photography for The Divergent Series: Allegiant started in the Atlanta, Georgia, area on May 20, 2015, with an ambitious agenda. Director Robert Schwentke wanted to immerse audiences in the
world beyond Chicago by filling the screen with bigger visual effects, more monumental vistas and more exciting action sequences than anything featured in the previous films.

The action kicks into overdrive a few minutes into the movie when Tris and her crew use high-tech grappling hooks to scale the wall encircling Chicago. “Going over the wall is one of our showcase set pieces,” says executive producer Todd Lieberman. “Robert and his team put together a wildly impressive escape with lots of action and emotion that involved pulleys and cables and cranes and bombs and guns and trucks.”

In the Bellwood Quarry near Atlanta, filmmakers built a massive 80-foot wall topped with an electrified metal fence. Augmented by visual effects, the wall appears 200 feet high on screen. For the actors, scaling the wall tested both strength and endurance. “They put you in a harness attached to little studs and make sure that you’re all locked up,” Woodley recalls.

Woodley, James, Kravitz, Teller, Elgort and Q, spent three days at the quarry, plus five more days shooting on a smaller, less steeply angled wall built to make it easier for the actors to say their lines while climbing. Elgort, an experienced rock climber in real life, had to forget everything he knew to portray his character properly. “Running up a real wall vertically was pretty sick,” he recalls. “My challenge was making it look like I didn’t know what I was doing because Caleb can’t run and climb. I had to slam my body against the wall. I wore all these pads so it didn’t cut me up, but those scenes completely chewed up my costume.”

Tris and company make it over the wall only to find themselves lost in a post-apocalyptic desert known as The Fringe.
“We started with the word ‘toxic’ and built from there,” says producer Barry Waldman. Under the direction of production designer Alec Hammond, crews sprayed about 80,000 gallons of environmentally friendly hydra seed and red dye to cover 15 acres of terrain in four Atlanta-area locations. “We’ve seen enough concrete ruins and rubble in the last two films, so with the Fringe, we had the opportunity to go outside the city’s wall and establish an entirely new landscape for our characters to move though,” says Hammond. “For inspiration in creating this broken, colorful, diseased environment, we looked at copper mine run-offs in Alberta and giant garbage heaps in China.”

Tris, Four, Christina, Caleb and Peter arrive at a breathtaking futuristic compound they soon learn is the headquarters of the Bureau of Genetic Welfare. Filmmakers designed the sterile, high-tech interiors of the Bureau to clearly differentiate it from the debris-filled Chicago ruins featured in the earlier films. To create the Bureau’s six interiors, construction crews worked around the clock for 11 weeks. “We had about 200 propmakers, painters, plasterers and carpenters building seven days a week for two and a half months straight,” recalls construction coordinator Greg Callas.

Allegiant is the first film in the Divergent series to feature aircraft, observes visual effects supervisor Stefen Fangmeier. “More unique designs, and new to this film, were the flying aircraft: The bubble ship, the bullfrogs and bulldogs. These are all “Bureau” aircraft and very futuristic in their design and function.” The Bureau’s all-purpose transport aircrafts, dubbed “Bullfrogs,” were custom-built for the film and mounted on hydraulic gimbals to simulate flight.