After being exposed as Divergents—people who don’t fit neatly into one of the five societal classifications or “factions”—Tris (Shailene Woodley) and Four (Theo James) find themselves on the run from Jeanine (Kate Winslet), the power-hungry leader of the Erudite faction. As the traitorous Dauntless troops under Jeanine’s command prowl the ruins of dystopian Chicago rounding up Divergents, Tris and Four traverse the city hoping to find allies among the Amity, Candor, Abnegation and Dauntless factions. 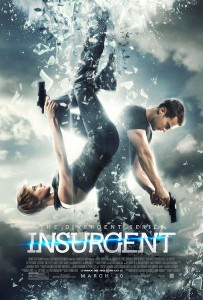 Insurgent clearly states that Candor Headquarters is located within the landmark Chicago Merchandise Mart. To create Candor in Atlanta, filmmakers used the rooftop patio of Atlanta’s AmericasMart for the attack, and a spacious, glassed portion of the interior of the top floor to build Jack Kang’s office.

The bestselling novel, Insurgent, was written by author Veronica Roth, whose first novel, Divergent, topped The New York Times Best Seller list after it was published in 2011. Divergent made NPR and Barnes & Noble’s “Best Books of 2011” list and was voted “Favorite Book of the Year” by Goodreads members. Roth wrote the book while an undergraduate at Northwestern University.

As they adapt Veronica Roth’s best-selling book series, the filmmakers are ever aware of the immense responsibility that comes with bringing a beloved author’s work to the screen. “The Divergent series has sold well over 30 million copies,” notes producer Douglas Wick. According to producer Lucy Fisher, having Roth available to discuss production and plot issues with was priceless. “We’re very lucky to have a living author to consult with,” she says. “On our last movie (The Great Gatsby) F.Scott Fitzgerald wasn’t really available. Veronica was very much a part of this process as a resource and sounding board.” Although the filmmakers made every effort to stay true to the themes and characters of the books, Roth understood that some changes needed to be made to present the 544-page novel in a two-hour movie.

Golden Globe®-nominated actress Shailene Woodley and Theo James return to lead the cast of The Divergent Series: Insurgent.  “I feel so lucky that Theo and I get to work together,” adds Woodley. “He’s such a class act. We both have similar rhythms and ways of approaching the work. You become a family during filming and then you disperse. But in a franchise, you get to come back and have the comfort of the tribe once again.”

Kate Winslet relished the opportunity to give audiences a closer look at Erudite and step back into Jeanine’s shoes. She also loved the sleek, ominous wardrobe that helped bring her malicious character to life. “It’s been really nice being able to wear all the cut, fitted dresses that help create such an intimidating villian.”

The sequel’s more elaborate sets, wider variety of detailed costumes and bigger action sequences were designed to immerse moviegoers in a world at war in The Divergent Series: Insurgent, as well as thrust them into the more intense and dangerous SIMs. Production designer Alec Hammond observes, “The Divergent Series: Insurgent is really five films in one. You have to shift gears completely for the look of each faction, as they all have different rules.” Filmmakers actually created three full-sized, 360-degree environment builds: Amity, Factionless and Erudite, plus dozens of smaller-scale sets.

Filmmakers had six weeks, hampered by spring rain, to create the 13-acre Amity set inside an established rural community. Over 200 workers of every type of craft worked seven days a week on three major structures: constructing the signature Amity Dome with the tree centerpiece, building a crumbling concrete freeway overpass, and altering the existing horse stable.

The four-story-high Factionless set filled an entire warehouse space and continued outside into the parking lot. Naomi Watts, who plays Evelyn, agrees. “The Factionless set was incredible, especially the way they have built something out of nothing, recycling old junk,” says the actress.

The third large build of the production was the Erudite headquarters (which included Jeanine’s laboratory, a control room, holding cells and hallways), and it was constructed in the entirety of Stage 10 at Screen Gems Studios in Atlanta. The lab was the most complicated set to build, according to construction coordinator, Greg Callas, in part because it has no straight lines.