Nadine (Hailee Steinfeld) and Krista (Haley Lu Richardson) are inseparable best friends attempting to navigate high school together… until Nadine’s older brother Darian (Blake Jenner) and Krista begin dating. With her view of the world rocked, Nadine is forced to see the people in her life – including her well-meaning but distracted mother (Kyra Sedgwick), and unlikely mentor and History teacher Mr. Bruner (Woody Harrelson) – with fresh eyes and new appreciation that people—and life—are more complicated than she thought. 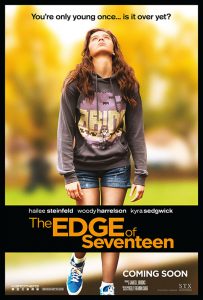 Originally writer/director Fremon Craig had set the story in Orange County, California, where she was raised.

Writer/director Kelly Fremon Craig was inspired to pen The Edge of Seventeen by the authentic teen films of her youth, a type of film not often found in today’s marketplace. “I’ve always been intrigued by periods of rapid emotional growth and self-examination, when situations change around us, forcing us to step into new roles and re-determine who we are and how we feel about ourselves.”

Fremon Craig’s spec script about a girl and her best friend in high school came to the attention of legendary Oscar® and Emmy® Award-winning producer James L. Brooks at Gracie Films. “Kelly had a first draft and when we first talked – just as she was leaving the office – she turned around and she said ‘No one will ever work harder than I do.’ And that did it.’” “Honestly, I wasn’t captivated by that first draft,” admits Brooks. “It was good work. But when Kelly said that, then we went to work. She went away for a big chunk of time. I’m a big believer in research. She’d bring back interview tapes and we’d look at it and it would inspire us.”

“The first time I read the script, I thought this is special,” remembers longtime Brooks collaborator and Gracie Films producer Julie Ansell. “The characters were so full and so funny. We spent almost four years working on it, which is our process. This is what we like to do. This is an amazing piece of writing”

Brooks describes the story succinctly. “After reading the first draft, there were some people who wanted to title the film Besties, and that first draft focused on a friendship between two girls. But now it’s about a lot more than that. The friendship is still the catalyst for a lot of action, and the story is mainly about this central character Nadine, but there are a couple of people in this movie with secrets, which adds great tension.”

Gracie Films’ reputation for acclaimed and thoughtful material as well as their track record for mentoring fresh filmmakers made it the perfect home for Fremon Craig and her screenplay. “I don’t do this very often and when I do, the motivation is always the same… a writer with a real voice, and that writer will always play a continuing role with the movie. That’s all we do with our little group,” says Brooks. “The first writer we worked with was Cameron Crowe for a picture called Say Anything, and he ended up directing that project. With Wes Anderson on Bottle Rocket, we knew he was going to direct going in, and with Kelly we knew it going in. We knew this would be her film to direct.”

As with any first-time director, there were concerns. “Kelly is an Orange County girl, just a delightful human being and there was a moment when we worried whether she’d be too nice for the job,” laughs Brooks.

Oscar® nominated Hailee Steinfeld is the center of an exceptionally strong cast with wide appeal. “This is a character-driven movie and finding Nadine was an incredible journey – very difficult and incredibly important,” remembers producer Julie Ansell. “We must have seen over 1,000 girls – from knowns to unknowns. We read everybody and we weren’t going to make the movie unless we found the right actress. Hailee walked in and that was that. Actually, every part was like that.

Up-and-coming actress Haley Lu Richardson was cast in the pivotal role as Nadine’s inseparable best friend Krista who falls for Nadine’s brother. “Again we had a large search for both of those roles,” says Ansell. “We cast Blake Jenner as Darian fairly quickly. We thought the Krista part would be easier but it turned out to be very difficult. Luckily, Haley Lu came in pretty late in the process. At the beginning, you only see Darian through Nadine’s eyes and they have a difficult relationship.”

Director Kelly Fremon Craig had Jenner write in a journal while prepping for the role. “Blake is one of the most committed, researched, and hardworking actors I’ve ever seen,” comments Fremon Craig. “His talent is extraordinary and he blew me away. The minute he came in, he had me crying.”

Veteran actors Kyra Sedgwick and Woody Harrelson portray the key adults in the story – Nadine’s mother and teacher. Filmmakers needed a powerful actor who could make an impact on a lead character with limited screen time and were thrilled to cast Oscar® nominated actor Woody Harrelson as Nadine’s History teacher. “We needed a Mr. Bruner who could stand up to Nadine,” says Ansell. “They have a fractious relationship, but at the same time the scenes between Woody and Hailee are hysterically funny.”

Prior to the start of principal photography, the director led the cast through a period of intense rehearsal. Sedgwick enjoyed this, “We started with a really good improv with Hailee and I. Coming from theater, I love rehearsal and it was interesting to talk to Hailee about it because she’s not used to rehearsal.”

Principal photography on The Edge of Seventeen began on October 21, 2015. The shoot utilized a multitude of practical locations around Vancouver, BC, Canada to create a fictional Pacific Northwest location, called Pointview, Oregon.

One of the key locations for the film was Guilford Park Secondary School in Surrey, BC, which played the fictional Lakewood High School. “On the first day Blake and I shot together, we were actually filming in a real high school that was in session,” shares Richardson. “We had done a couple takes when the bell rang, all the kids were rushing through the hallways during their passing period and we were just standing there. Being there made us realize that we had to talk louder and faster in the scene, because that’s how it really is in high school. Actually filming in a place where normal kids, real teenagers are experiencing their everyday life, brought you into that world right away.”