The most star-powered film franchise in history raises the bar to unprecedented heights with a dream team of global superstars, explosive stunts and mind-boggling weaponry in The Expendables 3. For the first time on film, Sylvester Stallone, Arnold Schwarzenegger and Jason Statham join forces with Mel Gibson, Wesley Snipes, Harrison Ford and 11 more legends and rising stars in an epic adventure that introduces audiences to a new generation of Expendables. 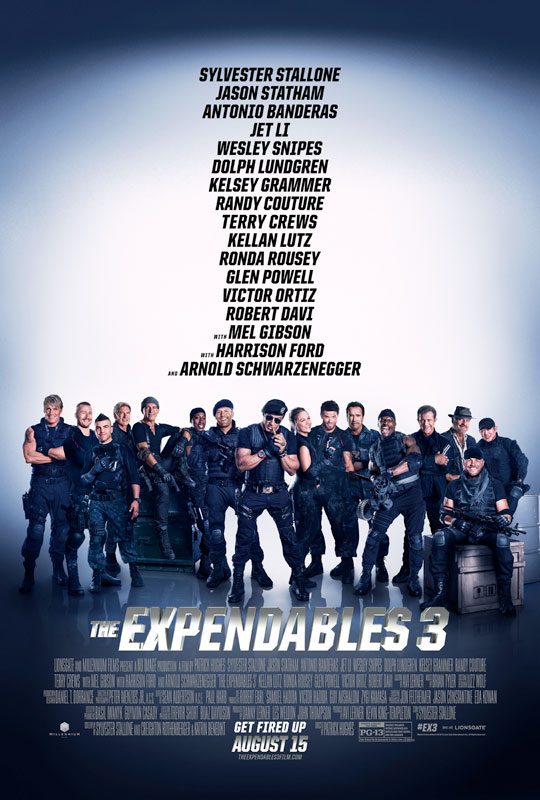 More than 1,000 people worked on the film, according to executive producer Boaz Davidson. “It’s history in the making,” he continues. “This could be a shock for any director, but Patrick just took control.”

For the third hard-hitting installment in the franchise, Stallone reteams with his partners at Lionsgate and Millennium Films. “Sly is a legend,” says Millennium chairman Avi Lerner. “He may be the only guy in the world who has created and starred in three successful film franchises—Rambo, Rocky and The Expendables. He’s a great moviemaker—a writer, director, producer, and star. The only job we haven’t given him yet is craft services.”

Initially, Stallone considered returning to the director’s chair. “But you know, the first movie was an experiment that worked,” he says. “And I still haven’t recovered from it. I was acting and trying to run four units at once, so it was a grueling experience.”

Instead, the filmmakers put their faith in director Patrick Hughes, based on his work on the low-budget Red Hill. “Patrick Hughes’ previous movie resonated very deeply with Sly,” says King-Templeton. “It reminded him of First Blood. We thought let’s see what happens if we give this guy bigger resources and a massive cast. We were not disappointed.”

The biggest challenge for Hughes was ensuring the proper tone for the film. The first two pictures were more focused on hard-core action. This time, Hughes says, he tried to inject as much fun and humor into the proceedings as possible.

Coordinating the schedules of a cast that included Stallone, Jet Li and Jason Statham as well as Arnold Schwarzenegger, Mel Gibson, Harrison Ford and Wesley Snipes was a massive undertaking. “It’s hard enough when you have one movie star,” says Davidson. “These guys are very busy and there are a lot requirements to fulfill before you can get them on set. Sometimes, it seemed like mission impossible.”

Mel Gibson was excited at the idea of playing a villain who faces off with Stallone in a Rambo versus Mad Max final confrontation. Stallone points to the mano a mano showdown as one of the highlights of the movie. “Punches are cheap, but history and character development take time,” he says. Veteran action icon Wesley Snipes joins the franchise as Doctor Death, one of the original five Expendables. The role was tailor-made for Snipes.

To capture the epic-scale action and intricate stunt choreography of The Expendables 3, the filmmakers returned to familiar ground: Bulgaria, where many of the most breathtaking scenes of The Expendables 2 were set. For more than 10 action-packed weeks, two units operated simultaneously in the former Eastern Bloc nation situated in southeastern Europe and bordering on Serbia, Greece, Romania, the Republic of Macedonia, and Turkey.