In the dark action comedy The Family, a Mafia boss and his family are relocated to a sleepy town in France under the Witness Protection Program after snitching on the mob. The The Family stars Robert De Niro, Tommy Lee Jones, Michelle Pfeiffer, Dianna Agron and John D’Leo . It is directed by Luc Besson . The screenplay is written by Luc Besson and Michael Caleo, based on Tonino Benacquista’s novel, Malavita. 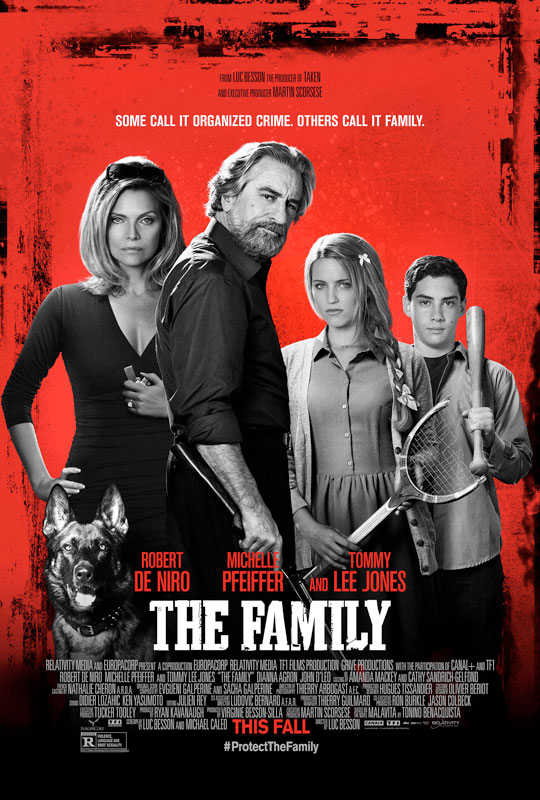 The filmmakers have fun at the expense of both the French and American characters, playing off their native idiosyncrasies to great comic effect. “We are not making fun of any one culture, the Americans or the French,” says Luc Besson. “We tried to make fun of everybody. I know the locals in that kind of small, country town far from Paris.”

Always attuned to small points of authenticity, Robert De Niro researched life in the Federal Witness Security Program, or WITSEC, prior to the shoot to see if an ex-crime boss from the East Coast might really end up in a small French village. “I learned that this situation could exist, especially if it were politically oriented in some way.” Robert De Niro made a phone call to an author and journalist friend who has written extensively about organized crime. He spent a few hours speaking with Robert De Niro and Luc Besson to provide additional authentic insights into for Fred’s previous life which served as an invaluable source of information.

With an iconic actor of Robert De Niro’s stature on board, casting the rest of the roles was easy, according to Luc Besson and producer Virginie Silla. “Michelle Pfeiffer was Luc’s first choice to play Maggie. She agreed to do the film very quickly because the story is so appealing and so was the idea of working with Luc and Robert.” Tommy Lee Jones and Luc Besson have been friends for years, collaborating on two films.

Sharing the screen with these veteran players are two exciting up-and-comers; Dianna Agron, best known for her work as cheerleader Quinn Fabray on the hit television show “Glee,” and John D’Leo, who has played small parts in such prestigious films as The Wrestler and Brooklyn’s Finest.

The Family was filmed on location in Normandy, France, as well as on the soundstage of Luc Besson’s La Cité du Cinéma, a state-of-the-art studio complex on the outskirts of Paris.