Documenting one of the most exclusive parties in the world side-by-side with an exhibition that drew more than three-quarters of a million visitors during its four-month run, The First Monday in May is a captivating portrait of the private side of a pair of high-profile public events. 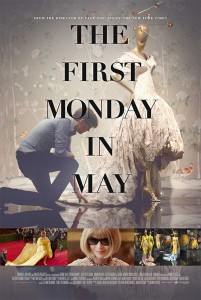 In his latest film, The First Monday in May, acclaimed documentarian Andrew Rossi captures an unprecedented look behind the scenes of the 2015 Met Gala, and the spectacular exhibition it honors, The Costume Institute’s blockbuster exhibition, “China: Through the Looking Glass.” Rossi follows exhibition curator Andrew Bolton and Gala co-chair Anna Wintour during the crucial eight months before the show’s debut, as they travel from New York to Paris to Beijing to build support for their audacious endeavor.

The First Monday in May began production in July of 2014, after Rossi was invited to meet with Vogue’s Director of Special Projects Sylvana Ward Durrett, and then with Wintour herself, about directing a film that would document the exhibit and the Gala. “They were fans of one of my earlier films, Page One[2],” he notes. “I threw my hat in the ring as someone who might want to work on this film.  After meeting with Met Director Tom Campbell and Andrew Bolton, they called me back and we started shooting. I filmed a preliminary meeting between Anna Wintour, Andrew Bolton and the exhibition’s artistic director, filmmaker Wong Kar-Wai, and it just sort of took off from there.”

As Bolton’s bold concept for the show begins to take shape, he proposes an unconventional setting that will reconfigure The Met’s Asian galleries and use selections from the museum’s own Chinese collection to provide context for the show, a suggestion that sets off a politically charged debate with curators of the museum’s Department of Asian Art.

“Orientalism,” or the outsider’s view of Eastern culture, is also central to Bolton’s creation, reinforced by stereotypical depictions of China in American movies of the 1920s ’30s and ’40s. Throughout the exhibition, spectral projections of clips from classic film including The Last Emperor, Raise the Red Lantern and Wong Kar-Wai’s In the Mood for Love remind museumgoers that the West’s vision of the ancient empire as a fantasy world peopled by “Dragon Ladies” and “Lotus Blossoms” ignores the complexities of a sophisticated and often misunderstood culture.

Rossi follows Bolton to Paris, where he visits the hermetically sealed vaults of the Saint Laurent archives to view the designer’s China-inspired 1977 Fall/Winter collection and talks to Maison Margiela’s creative director John Galliano about the culture’s influence on his work. Traveling on to Beijing, Bolton and Wintour contend with modern China’s sensitive self image and assure journalists, politicians, businesspeople and other potential supporters that the exhibition will be more than “just dragons and Ming vases,” as one interviewer says.

Also in Beijing, they visit the atelier of leading Chinese designer Guo Pei, who lends several extraordinary pieces to the show. Guo concentrates on reclaiming and updating the honored traditional crafts of China in her work, describing one garment she creates as “a wedding dress for my country.”

At the museum, the heavy lifting begins weeks before the exhibition debuts, with elaborate garments painstakingly unpacked and inspected, galleries reconfigured.  Just prior to the gala, legions of youthful Vogue staffers are deployed to rehearse for the big night. When the first guests enter through a tunnel lined with cinematic references, Rossi follows Michael Kors and his muse for the evening, Kate Hudson, through the experience.

“We wanted to give viewers the opportunity to see the show through the eyes of the attendees at the Gala,” he says. “Condé Nast was crucial in terms of being able to get access to the gala itself and coordinating filming with Michael and Kate, who were sort of our guides through the exhibition.”