The director and writer/star of Forgetting Sarah Marshall join the producer of Bridesmaids for the irreverent comedy The Five-Year Engagement. Beginning where most romantic comedies end, the new film from director Nicolas Stoller, producer Judd Apatow and Rodney Rothamlooks at what happens when an engaged couple, Jason Segel and Emily Blunt, keeps getting tripped up on the long walk down the aisle. 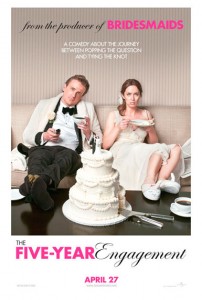 The Five-Year Engagement marks the third film on which Stoller and Apatow have worked with one another, and the fourth comedy that Apatow has produced for Segel.

The decision to create a screenplay about a seemingly perfect couple who can’t quite make it to the altar took root in Nicholas Stoller’s imagination four years ago.  He was in Hawaii and close to wrapping principal photography on his directorial debut, Forgetting Sarah Marshall, which starred and was written by Jason Segel and was produced by Judd Apatow.  The three men had collaborated often in the decade since Apatow brought them together on his critically acclaimed television series Undeclared and continued the partnership with The Five-Year Engagement.

Stoller and Segel began to flesh out the idea of an engaged-way-too-long couple, and the writing partners began the process of crafting their next film.  “After Sarah Marshall, Jason and I wanted to do a romantic comedy together,” says the writer/director.  “We wanted to create something that was about the relationship itself, not about the breakup.”

The question at the heart of The Five-Year Engagement is deceptively simple: Is a relationship right even if it’s not perfect?  “It’s about how do you know what’s perfect enough?” reflects Stoller.  “We wanted to make a movie that’s emotionally complex, but we wrote big comedy set pieces too.  We wanted to hit every problem that anyone has ever encountered while planning to get married.”