A suspenseful and moving thriller, THE FORGER switches seamlessly from bracing violence and criminal hijinks to scenes of painstaking familial reparations. It is also a showcase for the singular talents of John Travolta, who turns in an affecting performance as a man who has spent his life applying his artistic gifts in all the wrong ways. 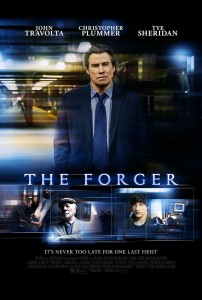 An interesting location is at the end of the movie when they’re on a tropical beach. A lot of that is done with digital effects, but the most interesting thing about it is that we actually filmed that shot with Christopher Plummer, John Travolta, and Tye Sheridan on an actual beach. It wasn’t very warm, and it was actually below freezing while we were shooting. – producer Bart Rosenblatt

In talking about the genesis of THE FORGER, producer Bart Rosenblatt said, “The screenplay came to us from ICM, and in reading the script we pretty much knew immediately that this was something special and something we wanted to pursue. We were lucky enough to be able to option the script.”

“In casting the film,” Rosenblatt continued, “a few of the representatives at WME had read the screenplay and mentioned that they thought John Travolta would be interested in it, which we were very excited about, because we thought he was perfect for the role. John read the script, and we were told that he really liked it and that he was interested in meeting with the director Philip Martin.”

For actor Anson Mount, who plays the villainous Tommy Keegan, this complexity in the relationships attracted him to the project. Marcus Thomas, who plays the role of Ray’s friend Carl, appreciated the story’s depth as well. Jennifer Ehle, who portrays Ray’s ex-wife Kim, enjoyed THE FORGER’s ability to span genres.

“My character as a little boy was a genius, what would be called a savant artist. He had this ability way above the norm of ability to paint paintings. He could do a Rembrandt. He could do a Monet. He could do it so well that you could perhaps not really know the difference between the real thing and his interpretation of that piece of art.”

In dogged pursuit of Ray are DEA Agent Paisley, played by Abigail Spencer, who has been building a case against Tommy Keegan, and her local Boston Police Department contact Officer Devlin, played by Travis Aaron Wade.

Rosenblatt talked about the decision to shoot on location and its benefits. “The story takes place in Boston in the film, and we normally don’t get to shoot films where the story takes place for a variety of reasons, including logistics or various tax rebates, but fortunately Massachusetts had a fantastic rebate. We were able to work it out so that we would be able to shoot the movie in the city where the story actually takes place, which was really exciting for us and for the director, because we wouldn’t have to recreate the city in another location.”

Rosenblatt detailed the intricacies of some of the specific locales seen in the film. “One of the reasons we were excited about filming in Boston is that they have a world-class museum there called the Museum of Fine Arts, Boston, which is actually the museum the story used for the heist. We immediately approached the museum not thinking in a million years that we’d ever get permission to spend several nights there shooting, because they have a priceless art collection there. After working with the museum for several weeks, they agreed to give us permission to film there, and in the movie you see a lot of really valuable and priceless pieces of art that are real. We were all amazed that they let us get so close to these Renoirs and other masters to actually photograph in those rooms.”