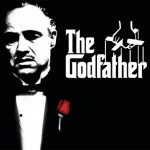 Although many films about gangsters had been made before The Godfather, Coppola’s sympathetic treatment of the Corleone family and their associates, and his portrayal of mobsters as characters of considerable psychological depth and complexity was hardly usual in the genre. This was even more the case with The Godfather Part II, and the success of those two films, critically, artistically and financially, opened the doors for more and varied depictions of mobster life.

The Godfather, along with the other films in the trilogy, had a strong impact on the public at large. Don Vito Corleone’s line “I’m gonna make him an offer he can’t refuse” was voted as the second most memorable line in cinema history in AFI’s 100 Years… 100 Movie Quotes by the American Film Institute. The line actually originates in the French novel Le Père Goriot, by Honoré de Balzac, where Vautrin tells Eugène that he is “making him an offer that he cannot refuse“.

An indication of the continuing influence of The Godfather and its sequels can be gleaned from the many references to it which have appeared in every medium of popular culture in the decades since the film’s initial release.

That these homages, quotations, visual references, satires and parodies continue to pop up even now shows clearly the film’s enduring impact. In the television show The Sopranos, Tony Soprano’s topless bar is named Bada Bing after the line in The Godfather when Sonny says, “You’ve gotta get up close like this and bada-bing! You blow their brains all over your nice Ivy League suit.”

The Godfather received Academy Awards for Best Picture, Best Actor, and Best Adapted Screenplay, and has been selected for preservation in the United States National Film Registry. In addition, it is ranked third, behind Citizen Kane, and Casablanca on the AFI’s 100 Years…100 Movies list by the American Film Institute. It was moved up to second when the list was published again, in 2008.