The Inevitable Defeat of Mister & Pete is a beautifully observed and tremendously moving film about salvation through friendship and the way transformation sometimes can happen just by holding on long enough. Director George Tillman, Jr. draws indelible performances from a fantastic cast, which includes Jordin Sparks,  Jeffrey Wright, Adewale Akinnuoye-Agbaje, Anthony Mackie and Jennifer Hudson, all led by Skylan Brooks and Ethan Dizon in stunning breakout performances as Mister and Pete. The film also features new music by Alicia Keys. 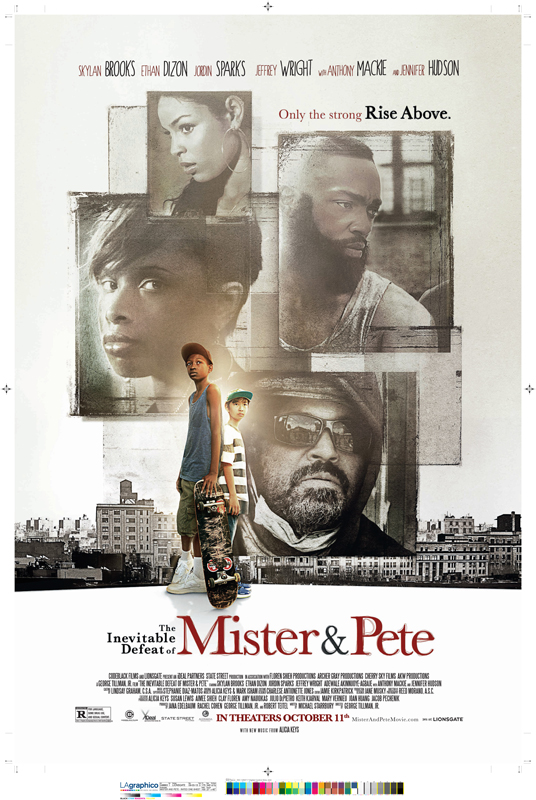 All films come with their own set of unique challenges—this script had two major ones. One, this emotionally complex story hinges on two lead characters under the age of 13. And two, the film had to be shot over a summer in New York so the two young actors could work a consecutive eight hour day without interfering with their education.

In late 2008, as the great recession began to sweep across the country claiming jobs, homes and retirement funds, screenwriter Michael Starrbury began to formulate the early ideas of a new script which honed in on the fact that some things never seem to change for certain classes of people. The poor remain poor regardless of economic and political shifts. Starrbury began to examine all of the emotional and psychological factors, not to mention the social obstacles, that inevitably keep people stuck in a particular place in society.

The result of Starrbury’s exploration became The Inevitable Defeat of Mister & Pete, which follows two young boys in a Brooklyn housing project whose mothers have abandoned them. The character of “Mister” is older and more aware of the realities of their situation, and reluctantly takes the younger “Pete” under his wing as they struggle to make it through a long summer in Brooklyn without any food, income or air conditioning. The script was written with humor and pathos and strove to avoid clichés, pity and fairy tale endings.

The screenplay landed on a pile of scripts at the office of renowned director, George Tillman, Jr., who had explored a diverse array of contemporary African American characters and stories in films like Soul Food, Man of Honor and Notorious, but had never fully delved into the culture and psyche of life for individuals living in the projects.

After auditioning several hundred kids for the roles of Mister and Pete, Tillman knew that he had found the perfect complements in Skylan Brooks and Ethan Dizon. Producer Rachel Cohen discovered Skylan Brooks after he caught her attention in a short film he did in 2010. And Ethan Dizon came courtesy of LA Casting.

Tillman cast the rest of the ensemble with “pros”, or as he describes, “well-known actors who could disappear into these roles from both an emotional and physical standpoint.” In the role of “Gloria,” Mister’s drug-addicted mother, Tillman was looking for an actress that you wouldn’t expect in the role … someone that would surprise you and bring something unexpected to the part. Tillman then sought out Academy Award®-winning actress Jennifer Hudson for the role. Beyond her on-screen commitment, Tillman was impressed by Hudson’s passion for the project as she was the first major star to sign on to the film and see it through its end.

The film was primarily shot in the Ingersoll Housing Project in Brooklyn, New York over 25 days. The production scouted about 50 housing projects in New York City before settling on Ingersoll. It was an extremely grueling shoot as Tillman and his cast and crew had to complete seven or eight scenes in each eight-hour day. To ensure his young actors were prepared for such a task, Tillman initiated a four week boot camp where Skylan and Ethan met and shadowed many of the kids living in the Ingersoll community.