The last 5 Years is a musical chronicling a love affair and marriage taking place over a five year period. Jamie Wallerstein (Jeremy Jordan) is a young, talented up and coming novelist who falls in love with Cathy Hiatt (Anna Kendrick), a struggling actress. Their story is told almost entirely through song. 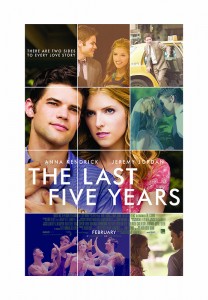 The film was shot in 21 days, in New York City, Brooklyn and Staten Island.

[accordion][acc title=”How did you get involved and what attracted you to the material to do the film in the first place?”]I’ve been a die-hard musical theater fan since I saw my first Broadway musical, the original production of Sondheim’s “FOLLIES”. One of my close friends, Todd Graff (“CAMP”) introduced me to Jason Robert Brown’s THE LAST 5 YEARS on CD long after the original Off-Broadway production. So, at first, my only experience with the show was solely through the music. I was knocked out by Jason’s score. It was beautiful and honest. It was emotional without being sentimental and it didn’t take sides. Anyone who’s been in a relationship -‐ married or not -‐ has gone through these experiences and feelings. I understood it.

So I’d listen to the original soundtrack over and over, imagining the story. I didn’t know at the time that the original production was staged with the two performers singing these “monologues” directly to the audience. I kept imagining scenes between the two people. I started fantasizing about making a small, independently financed, little jewel of a movie. In 2006, I met the original “Cathy”, Sheri Rene Scott, during auditions for “P.S I LOVE YOU”. She introduced me to Kurt Deutsch of Sh-K-Boom Records, who produced the original Off-Broadway soundtrack. He became my first partner on the project, introducing me to Jason Robert Brown. For several years, I worked on adapting it, never quite certain it would ever see the light of day. But I wanted to see this on film. And, like Comic-Con fans, we who love musical theater are obsessive personalities. I loved how unique it would be, although incredibly risky. A good friend of mine, Janet Brenner, who had produced theater, brought in an actual independent film producer Lauren Versel. Finally, we had a team and they somehow found financing. I still can’t believe we did it.[/acc]
[acc title=”How important was it to you to stay faithful to the book of the show and its score?”]It was extremely important to me to keep the structure of the original conceit in tact. I didn’t want to “Hollywood-ize” it with scenes or break it out into a traditional film. I saw THE LAST 5 YEARS as this generation’s “UMBRELLAS OF CHERBOURG”. I wanted to maintain the impact of the songs as being the primary storytelling device, so we added very little dialogue for transitional moments. I knew the majority of the score would have to be sung live (this was years before the movie “Les Miserables”) because the songs had to be acted, you had to believe they were being felt in order for the story to be believable. I also loved the structure of the story telling. It was so original. And, deep inside of Jason’s score, I found these backstory ideas for the characters. Cathy is a very creative, spirited, independent woman who simply can’t find her place in the world, in the way that Jamie has found his place. So the staging was informed by these ideas. The story also became about how when you fall in love, you can often lose your way in defining your own identity.[/acc]
[acc title=”It’s a unique structure for a movie. Talk about the intercutting timeline device and if it presented any challenges. Do you think audiences will find it hard to follow?”]All of Cathy’s songs begin at the end of the relationship. All of Jamie’s songs start at the beginning of the relationship. They meet in the middle when they sing together during Jamie’s proposal of marriage – when their love is equal. In a way, it’s exploring how men and women are always singing different “songs” in a relationship. How men and women see love in different ways even though they are experiencing a relationship together.

In the script, I helped myself follow it by adding years in subtitles. But, when I edited it, I had multiple screenings – always with half the audience who knew the show and half the audience who knew nothing about it. After each screening, I’d ask them, do you want subtitles telling you what year it is? At every screening, 99 percent of the audience said, No, don’t spoon feed us the story. I then asked them – were you confused by what period you were in? Every audience responded the same , Yes at times, but it didn’t matter. We always knew where we were emotionally. Even audiences who were not musical theater fans felt the same way. And it struck me, this is really interesting; a film that could only be followed emotionally.

The audience has to interact with the movie in order to have an experience. There are also time clues within the lyrics, the wardrobe and the hairstyles.[/acc]
[acc title=”On stage, the actors sing all of the songs, except the proposal, directly to the audience as a monologue. Why did you decide to have them sing to each other in the film?”]By adding a camera, the two actors and the songs became playable scenes. It added another layer because on stage, the song belongs to the singer. In the film, the song belongs to both characters -‐ the one singing and the one listening. The best example is “IF I DIDN’T BELIEVE IN YOU”. In rehearsals, my cinematographer, Steven Meizler, and I decided to let the two characters play the scene out, letting them do anything they wanted, they could move anywhere they wanted – and we would follow them with the camera, doing the entire song in one take. I knew when I was adapting it, that this song was as much about Cathy’s reaction as it was about Jamie’s intention. By using the camera and adding both characters, we were able to extract all this really cool subtext from every song. The characters took on additional backstory and layers, which you may only pick up having watched it more than once -‐ but it’s there.[/acc]
[acc title=”What was the casting process like? Did you always have specific actors in mind?”]Anna Kendrick was my first and only choice. Her favorite musical is Jason Robert Brown’s “PARADE”. I auditioned a few actors for “Jamie”, but Jeremy was always at the top of my list. I just believed these two in a relationship. My deal with Jason was this; I would select based on acting, Jason would have final word on whether or not they could sing the score. So, the actors had a two part selection process.[/acc]
[acc title=”Were there specific songs you had them sing during the audition process?”]I had all the “Jamies” sing “IF I DIDN”T BELIEVE IN YOU” because it has this incredible character arc within the song. Jamie starts off loving, patient and supportive then ends revealing an anger and resentment, expressing some really cruel feelings. If an actor could pull that song off, I knew the rest of the score would be fine.[/acc]