It was pulp sci-fi author Sydney J. Bounds’s short story, The Animators, which provided the basis for what would become The Last Days on Mars. First published in 1975 in the anthology Tales of Terror from Outer Space. 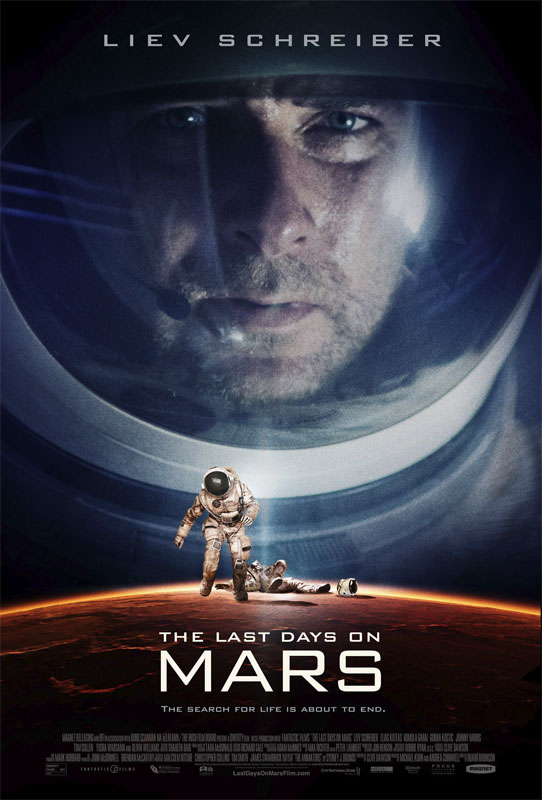 In the end, it was Ruairí Robinson’s unique pitch for the project – United 93 in space – that won him the job and crystallized The Last Days on Mars’s unique place in the pantheon of Martian moviemaking.

The story of a group of astronauts exploring the Martian surface fascinated screenwriter Clive Dawson, who brought the project to producer Michael Kuhn at Qwerty Films. “It was very succinctly written and felt like a film treatment,” says producer Andrea Cornwell. “It’s sparse and atmospheric, and put the focus not on spaceships but on the human psyche.” In the process of adapting the story, Dawson focused on expanding the mission’s crew and decided to lead the story not with Brunel, the group’s captain, as in the original story, but rather with senior systems engineer Vincent Campbell.

For Vincent, explains director Ruairí Robinson, what happens on the planet plays into the deepest of his fears. “He has a fear of losing himself that becomes manifest in facing something that literally threatens to take over,” he says. And it was this notion that attracted actor Liev Schreiber, who found the idea of Vincent’s claustrophobia and anxiety immediately appealing. Says Schreiber: “One of the things we started talking about when I became involved was ‘how do you articulate that claustrophobia?’ ‘How do you express something as complex as his sort of anxiety?’”

For Olivia Williams, who plays Kim, the film’s character notes were instantly relatable and not at all confined to sci-fi genre setting “When I read the script, the sweet scene of Vincent sitting with Lane and talking about Earth won me over. It could be two people sitting on a park bench on the top of Primrose Hill. It has a timeless, placeless quality.”

For the crew of The Last Days on Mars, creating something new in a landscape in which many other stories have taken place on the Red Planet was essential. Reference photographs from the recent unmanned Mars landers offered a vision of the planet that wasn’t the orange-tinted monochrome often witnessed in Mars movies, and Robinson says that, anyway, he doesn’t like color-coded cinema.

“I wanted to shoot on cinemascope and it’s one of the last films shot on film, too,” he explains. “The camera work starts stately and elegant but it slowly destabilizes until, at a certain point, it’s all handheld. In terms of the colors, I wanted it to look natural, cinematic and unforced.”

There are many sequences shot on the surface of Mars, for which the deserts of Jordan provided an Earthbound cypher, which for many of the cast meant they would be required to engage in strenuous action sequences whilst wearing thick spacesuits in temperatures of up to 44 degrees celsius. “It’s a real desert,” says Cornwell, making it just like the surface of Mars. “It’s hard. It’s slow. It’s heavy and tough to get anywhere. They know that now, because they were in Jordan.” The portion of the shoot in the desert took place at the beginning of the schedule, and the production arranged for the actors to share a hotel separate from the rest of the crew. “It forced them to get a sense of living together,” Cornwell explains. “From day one on set they knew each other and I think that’ll come through in the film.”