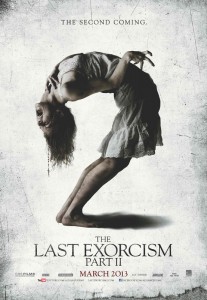 Gass-Donnelly approached the project with the restraint and style of classic horror movies from the 60s and 70s, using the genre as a means of exploring more complex themes and ideas.

Continuing where the first film left off, The Last Exorcism part II begins as Nell Sweetzer (Ashley Bell) is recovering after having survived a terrifying exorcism. Completely traumatized, Nell can’t remember entire portions of the previous months, only that she is the last surviving member of her family.

“We wanted to make a clear stylistic shift from the docu-style of the first film to a straight narrative in the sequel,” explains producer Eli Roth. “The new approach allows us to go deeper and darker. I never want to give away the secrets inside the haunted house, but now that we know who and what we’re dealing with, we really get to explore that.”

As The Last Exorcism part II picks up right where The Last Exorcism left off, the production returned to Louisiana, this time to the Southern gothic surroundings of New Orleans. The location was a joy for both the crew and the actors, on a number of different fronts.

Ed Gass-Donnelly remarks on the range of locations which include “houses built on stilts to avoid flooding, above ground cemeteries, as well as the skeletal remains of buildings destroyed by the hurricane that are long since abandoned. You can have beautiful 300 year old buildings right next to a decimated office tower that no one has repaired since Katrina.”