The Lorax, also known as Dr. Seuss’ The Lorax, is an American computer-animated 3-D film based on Dr. Seuss’ children’s book of the same name. It is being produced by Illumination Entertainment and will be released by Universal Pictures on March 2, 2012, what would have been the 108th birthday of Seuss, who died at the age of 87 in 1991. 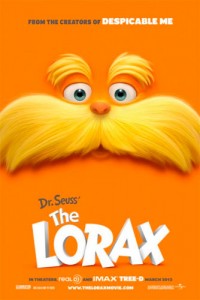 The 3D-CGI feature Dr. Seuss’ The Lorax is an adaptation of Dr. Seuss’ classic tale of a forest creature who shares the enduring power of hope.

The film will be the fourth feature film based on a book by Dr. Seuss and the second Dr. Seuss adaption fully computer-animated after Horton Hears a Who!. The Lorax will be Illumination Entertainment’s first film presented in IMAX 3D. It will also be the third Dr. Seuss film released by Universal, after How the Grinch Stole Christmas and The Cat in the Hat. The cast includes Danny DeVito, Zac Efron, Taylor Swift, Ed Helms, Rob Riggle, Betty Whiteand Jenny Slate.

This animated adventure follows Ted (Zac Efron), an idealistic 12-year-old who lives in a city without trees. He sets out to find the one thing that enable him  to win the affection of Audrey (Taylor Swift), the girl of his dreams, who wishes to see a real tree. To do so, he must discover the story of the Lorax (Danny DeVito), a grumpy yet charming creature who fights to protect his world.

The film is directed by Chris Renaud, and co-directed by Kyle Balda. It was written by Ken Daurio and Cinco Paul, the duo who also wrote the script for Blue Sky’s Horton Hears a Who!. Audrey Geisel, Dr. Seuss’s wife, is executive producer, and Chris Meledandri, who managed Horton Hears a Who! at Fox Animation, is producing the film.

The movie is fully fabricated in the French studio “Illumination Mac Guff”, which is the animation department of Mac Guff which has been acquired by Illumination Entertainment in Summer 2011.