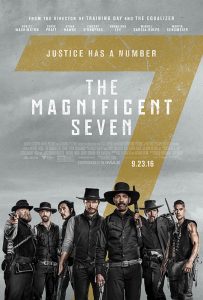 Before filming began, the actors began riding and weapons training. “They did horse training, gun training, learning how to twirl and spin the guns,” says director Antoine Fuqua.“They went shooting with real weapons, just so they can get the feel of what those weapons really do. They wore their holsters around all the time to get used to their weight. They wore their boots for months – and do you know how hard it is for a city boy to walk in cowboy boots on dirt every day?”

“When MGM asked me about making a Western, I got excited about the possibility of it, because I grew up with Westerns,”says Antoine Fuqua, who re-teams with Denzel Washington in the story of seven outlaws, gunslingers, gamblers and bounty hunters who band together to save a town under the thumb of corruption in The Magnificent Seven.

“An older generation might know this title, but today’s generation doesn’t, and that made it ripe for a retelling,” says Todd Black, who joined Roger Birnbaum as a producer.  “Antoine’s visceral, intense filmmaking brings a very contemporary and stylish feel to a classic story about a band of brothers.  At its heart, it’s a simple story of men doing what’s right – that’s something I try to find in every movie that I do.”

The idea began with Roger Birnbaum, who previously served as Co-Chairman and Co-CEO of Metro-Goldwyn-Mayer, coming in to head the studio with his former partner, Gary Barber, in 2010.  “At the time, there wasn’t very much in development, so we had to start from scratch,” says Birnbaum.  “We were looking at MGM’s wonderful library, and staring me in the face was The Magnificent Seven, a film I loved as a young boy and later on as a student of cinema, when I learned of the evolution of the film from The Seven Samurai.  It’s a classic story and I thought it was worth retelling.”  Later, when Birnbaum left the studio to work as a producer, The Magnificent Seven became his first project.  Columbia Pictures came on to partner with Metro-Goldwyn-Mayer on the project.

Fuqua and Washington have a very strong relationship.  “Antoine and I have obviously had great success,” says Washington.  “We won our Academy Award® with Training Day and had great financial success with The Equalizer.  He’s a master filmmaker – he knows what he’s doing and he allows me to do what it is I know how to do.  We’re a good fit.”

Black says that he thinks Washington was likely drawn to the project for a number of reasons.  “I think Denzel wanted to do it because he had never done a Western.  He rarely does ensembles, and I think he thought it would be fun to do one.”

With Washington leading the way, the filmmakers reached out to Chris Pratt to play the gambler Josh Faraday, Chisolm’s right-hand man and the first person who joins Chisolm in the seven.  Pratt jumped at the chance, speaking for many of his co-stars when he points out that the chance to play real-life Cowboys and Indians was irresistible.  “The reason I was so excited to do a Western was to get the chance to do the horse and gun training.  Getting to hang out with Bobby, our horse wrangler, and all of the real cowboys was an absolute treat.  Getting to play with real Colt Peacemakers, .45 long Colts – shooting them, spinning them – was so much fun.  We were a bunch of big kids out there.” says Pratt.

Once Washington and Pratt were cast, the filmmakers began to think about the roles that would surround them.  “Denzel and I sat and talked about it.  We started reading all the books about the West and how diverse it was then.  There were people from everywhere in the world – Mexico, Ireland, Russia.  I thought, ‘I wanna see THAT West,” says Fuqua.

For the role of Emma Cullen, the filmmakers cast Haley Bennett, who had worked with Fuqua, Black, and Washington on The Equalizer.

As the villain Bartholomew Bogue, the filmmakers cast Peter Sarsgaard. For advice on what it was like to work with Fuqua, Sarsgaard turned to family: his brother-in-law is Jake Gyllenhaal, who starred for Fuqua in Southpaw.  “Antoine gives you the most room you could every possibly want as an actor – and then he figures out, on the spot, how he’s going to shoot that and turn it into the narrative,” says Sarsgaard.

In Fuqua’s vision, the film was shot in a classic way – avoiding visual effects when possible, and choosing instead to work with some of the world’s greatest stuntmen to perform practical stunts, capturing the action in-camera.  Chris Pratt was impressed: “I’ve done a lot of big movies similar in scale and scope with giant sets, but most of those – Guardians of the Galaxy, Jurassic World – relied heavily on visual effects,” he says.“On this movie, we did practical stunts.  Every horse fall you see is a stuntman falling off a horse traveling at a fast speed, and there are hundreds of them.”

For gunslinging training, the seven worked with Thell Reed, a quick-draw expert since he was a boy, who toured with Gene Autry’s Wild West show and later lent his expertise and skill behind the scenes of “Gunsmoke” and countless Western films.

An hour outside of Baton Rouge, Louisiana, production designer Derek Hill built the town of Rose Creek.  And we aren’t talking one street of facades: he built the entire town, multiple streets, building the actual buildings and decorating their interiors.  In the end, Hill was responsible for 25 buildings, a church, and a fully functional livery stable.

After teaming up on Southpaw, Fuqua became close with Academy Award®-winning composer James Horner.  It was Horner’s urging that convinced Fuqua to make TheMagnificent Seven a priority. Sadly, Horner passed away last summer in an airplane accident.  It was only later that Fuqua realized that the composer had bequeathed him a gift.  “While we were shooting, I got a call – ‘James left a gift for you.’  I didn’t know what it was, I thought maybe he had bought something for me related to Southpaw,” Fuqua recalls.  Simon Franglen, Horner’s longtime programmer and arranger, came to the set with that gift – a suite of themes.  “Simon said, ‘James wrote these themes for Magnificent Seven.’  He wrote them off the script – who does that?  The movie may not have happened, and he had written themes, rough stuff, orchestral stuff.  It was glorious.  It floored me.”

Franglen would complete the score, basing his work on the music that Horner had started.  “James was one of my closest friends, and I spoke to him the day before he died,” Franglen says.  “This project was very dear to him – he was really looking forward to it.  After he died, we wanted to finish what he had started and follow through with his vision for the score.  It was really important to him to do this movie, and I hope people will think of it as a legacy for James’ incredible volume of work.”

When Franglen’s score was complete, he and Fuqua planned a special treat for the end of the film.  “What James started and Simon finished was a score that they made their own; it has a scope and texture that feels contemporary, but stays true to the genre,” Fuqua concludes. “Then, for the end of the movie, we took the original theme by Elmer Bernstein and brought in an 87-piece orchestra.  It takes me back to when I was 12, seeing that movie for the first time, and thinking, ‘I want to be one of those guys.’”