Set against the backdrop of the early 1960s, at the height of the Cold War, “The Man from U.N.C.L.E.” centers on CIA agent Solo and KGB agent Kuryakin. Forced to put aside longstanding hostilities, the two team up on a joint mission to stop a mysterious international criminal organization, which is bent on destabilizing the fragile balance of power through the proliferation of nuclear weapons and technology. 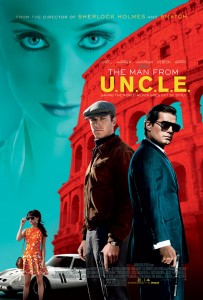 The single most complex setting from a design standpoint, as well as stunts and effects, was the climactic chase off Vinciguerra island, which was collaged from several individual locations: Hankley Common, a rural area in Surrey; the Miseno tunnels and Baia Castle in Naples; roads outside of Rome; and Aberystwyth, on the west coast of Wales.

“It’s a zone I find fascinating, the way men interact with each other,” says Guy Ritchie, who directed, produced, and co-wrote “The Man from U.N.C.L.E.” screenplay, based on the hit 1960s TV series of the same name. “Even going back to ‘Lock, Stock and Two Smoking Barrels,’ I’m drawn to that male-to-male dynamic as kind of a genre unto itself.”

So in some respects, it’s a buddy movie…apart from the fact that “they kick the living daylights out of each other as soon as they meet,” says Henry Cavill, who stars as Solo, the suave and often self-serving American agent.

Starring as Kuryakin, Armie Hammer offers the volatile but more conventional Russian’s point of view: “Kuryakin is the ultimate soldier, always in line and giving his best. Then he’s thrust into a position that he hates and there’s nothing he can do about it.” Producer and co-screenwriter Lionel Wigram is reunited with Ritchie following a successful partnership on the equally genre-blurring “Sherlock Holmes” films. “One of the ways we put our own spin on it was by making it an origin story about how U.N.C.L.E. was formed,” he says.

Hugh Grant, cast as the debonair and unflappable Waverly, the only other familiar character from the series apart from Solo and Kuryakin, also warmed to the script. With characteristic humor, he says, “I’ve always liked Guy’s films and thought they were quite hip, and I’m not sure I’ve ever done anything even remotely hip, so that was part of the appeal.”

Locations play a significant role in “The Man from U.N.C.L.E.,” helping set the tone and authenticity. The Berlin sets exude a cool, stark palette overall, in comparison to the more lush, bright and sensuous colors and textures of the film’s Italian locales. The Rome locations included the famed Spanish Steps, Teatro Marcello, Piazza Venezia and the Grand Plaza Hotel, where Solo, Kuryakin and Gaby stay while cozying up to the Vinciguerras. In Naples, the team used the underground tunnels at the Fonderia Iron Works for the dungeons of the Vinciguerra island compound, which could be the ideal spot to hide a nuclear physicist with his own underground lab, while the Castle Baja in the Bay of Naples, believed to have been built for the Emperor Nero, provided its impressive exteriors.

The UK stood in for East Germany, offering both practical locations and sets built at Warner Bros. Studios Leavesden, including the infamous Checkpoint Charlie, recreated on the studio back lot.

How the era broke culturally from the immediate post-war drabness of the 1950s was what inspired award-winning costume designer Joanna Johnston, who researched the period via fashion magazines of the time.