The Matrix is a 1999 Australian-American science fiction-action film written and directed by Larry and Andy Wachowski, starring Keanu Reeves, Laurence Fishburne, Carrie-Anne Moss, Joe Pantoliano, and Hugo Weaving. It was first released in North America on March 31, 1999, and is the first installment in the Matrixseries of films, comic books, video games, and animation. 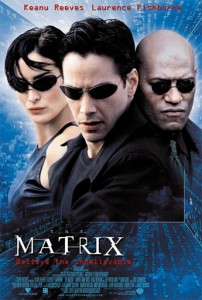 Actor Will Smith turned down the role of Neo to make Wild Wild West, due to skepticism over the film’s ambitious bullet time special effects. He later stated that he was “not mature enough as an actor” at that time, and that if given the role, he “would have messed it up”. Nicolas Cage also turned down the role because of “family obligations”. Prior to the casting of Keanu Reeves, Sandra Bullock turned down the role of Trinity because she didn’t see herself working with the actor then being considered to play Neo. Sean Connery also respectfully declined the role of Morpheus.

The film depicts a future in which reality as perceived by most humans is actually a simulated reality created by sentient machines to pacify and subdue the human population, while their bodies’ heat and electrical activity are used as an energy source. Upon learning this, computer programmer “Neo” is drawn into a rebellion against the machines, involving other people who have been freed from the “dream world” and into reality.

The film contains many references to the cyberpunk and hacker subcultures; philosophical and religious ideas such as René Descartes’s evil genius, the Allegory of the Cave, the brain in a vat thought experiment; and homages to Alice’s Adventures in Wonderland, Hong Kong action cinema, Spaghetti Westerns, dystopian fiction, and Japanese animation.

The Matrix was a co-production of Warner Bros. and Australian Village Roadshow Pictures, and all but a few scenes were filmed at Fox Studios in Sydney, Australia, and in the city itself.

Recognizable landmarks were not included in order to maintain the setting of a generic American city. Nevertheless, the Sydney Harbour Bridge, ANZAC Bridge, AWA Tower, Martin Place and a Commonwealth Bank branch are visible in some shots, as is signage on buildings for the Sydney offices of Telstra and IBM Corporation among others. Other clues to the filming location include left-hand traffic flow and signs featuring Standard English terminology and spellings such as “lift” and “authorised” (rather than the American English “elevator” and “authorized”).

Subtle nods were included to Chicago, Illinois, the home city of the directors, through a subtly placed picture of the Chicago skyline, city maps, the destination of the subway train during the subway station fight between Neo and Agent Smith saying “Loop” and place names like the Adams Street Bridge, Wells and Lake, Franklin and Erie, State and Balbo, and Wabash and Lake.

The rooftop set that Trinity uses to escape from Agent Jones early in the film was leftover from the production of Dark City, which has been remarked upon due to the thematic similarities of the films. According to The Art of the Matrix, at least one filmed scene and a variety of short pieces of action were omitted from the final cut, and have (to date) not been published.

The Wachowski Brothers were keen that all involved understood the thematic background of the movie.For example, the book used to conceal disks early in the movie, Simulacra and Simulation, a 1981 work by the French philosopher Jean Baudrillard, was required reading for most of the principal cast and crew.