The Muppets is a comedy film from Walt Disney Pictures directed by James Bobin. The script was written by Jason Segel and Nicholas Stoller, the writer-director team behind the 2008 film Forgetting Sarah Marshall. James Bobin, co-creator of the HBO series Flight of the Conchords, is directing the film and Bret McKenzie, co-star of Flight of the Conchords, has written the film’s songs. It is the seventh theatrically released feature film to star The Muppets. 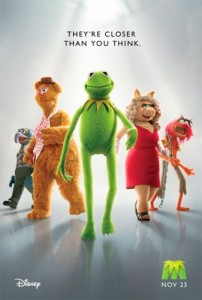 In 2008, Jason Segel and Nick Stoller pitched a concept for a Muppet movie to Disney Vice President Kristin Burr. The pitch was well received and the pair was offered a deal to develop their script. In March 2008, Variety first reported that Disney signed a deal with Segel and Stoller to create the next Muppet movie; with Segel and Stoller penning the script and Stoller attached to direct. Jason Segel has been very outspoken on his involvment, mentioning his role writing for the Muppets in many interviews and appearances.

In his March 20, 2009 appearance on Late Night with Jimmy Fallon, Jason Segel talks about his love for the Muppets, and his then-current work on the script for the next Muppet movie. Statler and Waldorf appeared in the audience to heckle Fallon and Segel.

The film started production in September 2010. Principal photography for The Muppets began on October 30, 2010 and concluded on February 11, 2011. Walt Disney Pictures has announced that the movie will be released in theaters on Wednesday November 23, 2011. Theatrically, the film will be accompanied by a brand-new short film featuring Pixar’s Toy Story characters.

Principal photography was completed on February 11, 2011. On April 26, 2011, a second unit film crew traveled to Reno, Nevada to film some exterior shots. Including a scene in the Bonanza Casino parking lot with some Muppet characters, and a small shot looking into the casino.

In May 2011, Kermit plugged the film in a web video reporting from the world premiere of Pirates of the Caribbean: On Stranger Tides at Disneyland. The trailer for the movie was attached to the film. The trailer was promoted as a fake romantic comedy starring Adams and Segel entitled Green with Envy for the first half, with the Muppets appearing in the second half (much to the surprise of Segel). When uploaded online, the trailer was named as such, and Disney even created a faux poster for “Envy,” which includes a hidden Kermit.