Ethan (Joseph Gordon-Levitt[1]), Isaac (Seth Rogen) and Chris (Anthony Mackie) have been friends since childhood, and for a decade, their yearly Christmas Eve reunion has been an annual night of debauchery and hilarity. Now that they’re entering adulthood, the tradition is coming to an end, and to make it as memorable as possible, they set out to find the Nutcracka Ball – the Holy Grail of Christmas parties. 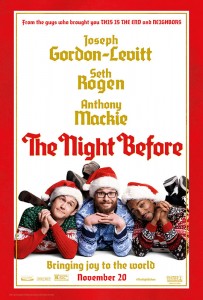 Best known for his dramatic roles, Anthony Mackie wanted the comedic role in The Night Before so much that he took the extreme step of auditioning for the part (his first audition in 10 years).

In that sense, the film’s co-writer/director, Jonathan Levine, says he was inspired to make a film that would follow in the footsteps of certain genres, but become unlike any other movie. “I wanted to make a New York movie, a hangout movie, and play with the stylistic elements of a Christmas movie, and play with the rules of the genre. We got to make a movie that was very grounded on one level, but also contained elements of magical realism. But the really cool thing about making a holiday movie is your number one mandate is to make people happy,” he says.

One other way Levine gives the R-rated movie a Christmas vibe is though music, with nostalgic Christmas classics like “Twelve Days of Christmas,” “Christmas in Hollis,” and “Oh, Holy Night,” as well as Darlene Love’s renditions of “All Alone on Christmas” and “Christmas (Baby Please Come Home)” and My Morning Jacket’s performance of “Please Come Home for Christmas” playing in counterpoint to the wild night out, grounding the movie with familiar sounds.

So Levine and his co-screenwriters (the screenplay is by Jonathan Levine and Kyle Hunter &Ariel Shaffir& Evan Goldberg, from Levine’s story) make full comedic use of a Christmassy New York: from the big piano (where Kanye West’s “Runaway” gets a new rendition) to the tree at Rockefeller Center to Tompkins Square Park, The Night Before takes our heroes up and down the city before winding up at the legendary Nutcracka Ball – the ne plus ultra of New York holiday parties.

Levine says that he was inspired to approach the project during the post-production of 50/50[3], his highly acclaimed film that also teamed Gordon-Levitt and Rogen.

At the center of the story is Ethan, played by Joseph Gordon-Levitt. As his friends Isaac and Chris have seen success in marriage and careers, Ethan remains stuck in place. Rogen typically plays the straight man in his comedies, so for this role, the actor relished the fact that his character becomes completely unhinged.

Taking the role of Diana, the love of Ethan’s life who got away, is Lizzy Caplan. Having previously worked with Caplan on The Interview, the producers knew that she was a force in her own right with the perfect blend of wit and sarcasm to play opposite the leading men.

Mindy Kaling joins as Sarah, Diana’s uninhibited and boisterous counterpart and the bane of Isaac’s existence. Behind the freaked out expectant husband, Isaac, is Betsy, his good-natured wife with a sense of humor, rolling her eyes played by Jillian Bell. Up-and-coming comedian Nathan Fielder, star of Comedy Central’s “Nathan for You,” takes the role of Joshua, the limo driver shepherding Ethan, Isaac, and Chris around town.

One of Levine’s key partners on the film was the production designer, Annie Spitz, with whom he also worked onThe Wackness and 50/50.

To create the location for the party to end all parties, the possibilities were endless. “My original plan was for the party to be in an abandoned subway tunnel, but as it turns out, that’s very dangerous,” Levine says. “We looked at an old fort on the Hudson. But finally, we settled on a great space out in Greenpoint, a refurbished factory that’s now used to host weddings and other special events.”

Behind the camera was director of photography Brandon Trost. Ever since he was brought to Rogen and Goldberg’s attention as they searched for a DP for their first film in the director’s chair, he’s been the go-to guy to bring an unconventional look to studio comedies: he brought an apocalyptic vibe of This is the End and gave The Interview the look of a dark thriller. With Rogen and Goldberg vouching for him – and his body of work speaking for itself – he has also lensed Neighbors[4], in which Rogen starred for Nicholas Stoller, and Levine chose him for The Night Before as well.

In the exteriors, to make summer double for winter, Trost put steam pipes on every block, and the filmmakers would wet down the pavement and add “snowy remnants,” as Levine recalls. But it all worked out. “Looking at the movie now, I don’t remember what we shot in January and what we shot in August,” says the director.