From acclaimed writer/director Ti West and master of horror Eli Roth, The Sacrament follows two Vice Media correspondents as they set out to document their friend’s journey to find his missing sister. They travel outside of the United States to an undisclosed location where they are welcomed into the world of “Eden Parish,” a self-sustained rural utopia, comprised of nearly two hundred members. 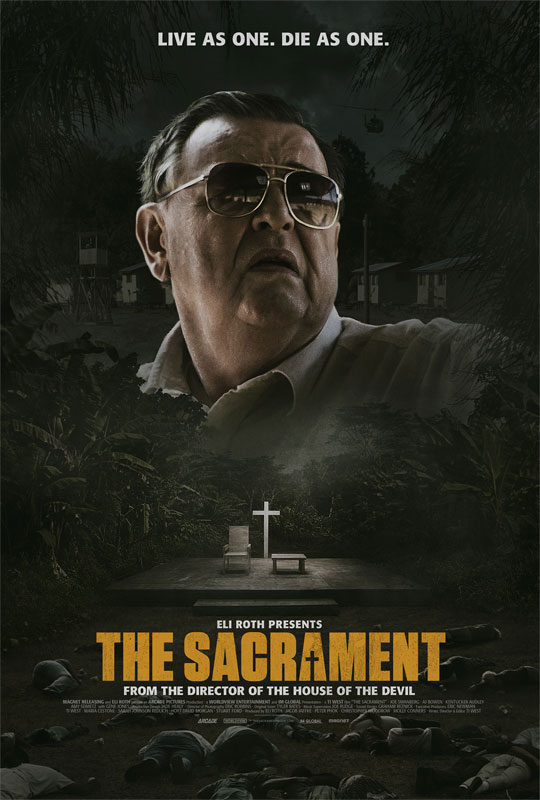 My goal was to create an elevated genre film that examines the last days in the life of a religious cult. It is rare to find films like these that are more than just cheap thrills aimed at the lowest common denominator. It was important to me not to portray these characters as mindless, psychotic cult members, but as relatable real people
– Ti West

Tell us about the concept and story behind THE SACRAMENT. How did the idea come to you?[1]

I had always wanted to make a mini-series inspired by Jonestown but felt it would either never happen or take far too long to come to fruition, and being as impatient as I am, I decided to find a way to rework that story into something more likely to get made. We are living in a somewhat unstable time, and a lot of the reasons people joined The People’s Temple in the 60’s and 70’s seem very relevant today. In updating the story to a modern era, I felt that VICE would be most appropriate as the media outlet where the main characters work. VICE has been responsible for some of the most interesting and provocative content in recent years, and they take a lot of risks for their stories. It was a perfect fit.

Why did you decide to structure this project as a documentary style film?[2]

I actually consider “documentary-style” a type of “new-media” cinema. I used VICE’s documentary style as a structural model, but really tried to have the story, cinematography and soundtrack transcend familiar genre labels. Hopefully it feels not like “found footage,” but rather like something “new.”

Talk about the casting process.[3]

One of the great things about this project was that I had total control over casting. Most of the roles were written specifically for certain actors I had in mind, all of whom I ended up with. In my opinion, casting is 75% of directing, and when you are able to get the right people for the roles, it not only makes the job easier, it makes for a more authentic film.

Have you worked with any cast members of the production previously?[4]

I had worked with almost all of them in some form or another over the years, but this was the first time I was able to get everyone together all at once, the exception being Gene Jones, who I had never met or worked with. Suffice it to say; when he showed up to set on his first day, we were all blown away by his performance.

How was it shooting in Savannah, GA?[5]

Savannah was very welcoming. We originally intended to shoot near Charleston, South Carolina, but after starting pre-production, the state decided the content of our film was not worthy of their tax dollars and disqualified us from being able to use their tax credit. While that was incredibly frustrating at first, it was probably a blessing in disguise because moving down to Savannah ended up benefitting the production. What is most impressive is that we built the entire foreign community of “Eden Parish” in someone’s backyard in Georgia.