For one bustling Manhattan apartment building, the real day starts after the folks on two legs leave for work and school. That’s when the pets of every stripe, fur and feather begin their own nine-to-fi ve routine: hanging out with each other, trading humiliating stories about their owners, auditioning adorable looks to get better snacks and watching Animal Planet like it is reality TV. 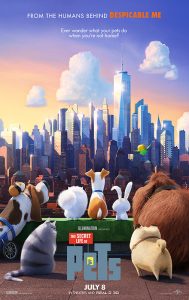 One of the moments that particularly resonated with the filmmakers was the scene in which Max and Duke are staring at a man on a park bench eating a sandwich. You can see in their eyes how much they want it, and the dog owners on the production related to their own pets staring longingly at food. Together, the team found many moments that started from an individual’s experience but grew deeper through their collective voices.

“The inspiration behind Pets” says Chris Meledandri, who is the founder and CEO of Illumination Entertainment “was all of the pets that my family and I have owned since I was a little kid. We grew up with a cat and dogs and a bird, and what I realized as I became a parent was that we all invested these pets with rich emotional lives.”

Janet Healy who oversees the Production arm of the company, Illumination Mac Guff in Paris, France, sparked to the film’s premise. “We project so much character onto our pets—the things we want them to be. Even when those qualities aren’t there, we continue to feel that they have this secret, full life that we’re not a part of. When Chris told us this high-concept idea, we thought it was amazing.”

Working with the writing team of Cinco Paul & Ken Daurio, with whom they have worked on the films in the Despicable Me franchise, as well as Dr. Seuss’ The Lorax[2], Meledandri and Healy first asked them to develop this idea into a screenplay. They were then needed to start Despicable Me 3, and writer Brian Lynch—known for his work with Illumination on Minions, Hop and their highly successful theme park ride Minion Mayhem—took the helm. This is Lynch’s third collaboration with Meledandri, and he appreciates Meledandri’s character-centric approach.

Meledandri can trace the different characters in the film back to the colleague whose pets inspired them. “Cinco and Ken shouldered the project initially, and Brian has worked with us for the last year-plus,” he notes. “A lot of the anecdotes of his life made their way into the film. It’s been a great pleasure to watch as everyone has brought their individual experiences of pets, whether they’re from childhood or from the pets that they have now, into this movie.”

Producers Meledandri and Healy have partnered with The Secret Life of Pets’ director, Chris Renaud, for many years. “When I was running animation at FOX and executive producing movies, Chris Renaud was our star storyboard artist.” Meledandri provides. Director Renaud explains what drew him to the film: “What I wanted to do was to portray pets in this very contemporary way. I also liked playing with this funny, very real idea that when you leave your dog, even if you come back 20 seconds later, they act like you’ve been gone for 24 hours.”

Co-director Yarrow Cheney, who had also been production designer on Despicable Me discusses his inspiration: “Every animal has their own personality, and there is so much humor in that. They aren’t people, but it feels that way. To have the opportunity to capture that in fi lm is what spoke to me, especially as a pet owner.”

When the filmmakers sought out voice talent for The Secret Life of Pets, they found it wasn’t difficult to pitch the project. Reveals Meledandri: “Everybody was excited for the same exact reason: We all love our pets and are absolutely convinced that they have a life beyond what we see when we leave them in the morning or come home at the end of the day.”

Meledandri states that Illumination also appreciates performers who can bring a bit of wickedness and slightly off-center vocal mannerisms to their roles: “Steve Carell did a fantastic job of that in Despicable Me. Kevin Hart does this with Snowball, and this unexpected quality is one of the reasons why we love working with Louis C.K. At the same time, we’re also not afraid of warmth. We always feel that if those feelings are authentic within the context of the movie that they enrich the film. There is no better example of that than Eric Stonestreet’s persona of Duke.”

Meledandri raves that Snowball is absolutely one of the wildest, most imaginative animated characters on any fi lm he has ever seen. He agrees with his colleagues that so much of that energy comes from the man who vocalizes the wayward bunny. “Just like with Louis and Eric, this is Kevin Hart’s first voice for an animated movie,” Meledandri says.

Gidget is voiced by Jenny Slate, an impresario of voices and a filmmaker in her own right, who returns to Illumination with Pets. Of Lake Bell’s performance as Chloe, Meledandri lauds: “Lake captures that indifference and intelligence of a cat perfectly. She invests this character with personality simply by using her voice.” Healy, arguably one of the biggest cat lovers on the team, has a special place in her heart for this pet. She laughs: “Chloe looks so much like the cat that I had for 18 years, an 18-pound gray tabby named Binky.”

Every step of the design and animation process was overseen by producer Healy, who manages the team with precision. “Janet’s leadership in Paris, along with Jacques Bled, the partner of Mac Guff—the studio that we acquired and have now built into Illumination Mac Guff—is the best-led studio that I can imagine,” offers Meledandri.

Oscar®-winning French composer Alexandre Desplat was brought onto the production to provide a distinctive New York inspired score for The Secret Life of Pets. Complementary to Desplat’s work, The Secret Life of Pets features a soundtrack that includes modern flair—from Taylor Swift’s infectious “Welcome to New York” and Nappy Roots’ “Good Day” to new rock powerhouse songs such as System of a Down’s “Bounce,” the Beastie Boys’ “No Sleep Till Brooklyn” and Andrew W.K.’s “Party Hard.” With classical work, including Vivaldi’s timeless “The Four Seasons ‘Spring,’” and rock and pop standards such as Queen’s “You’re My Best Friend” and the Bee Gees’ “Stayin’ Alive,” audiences of all ages will find themselves humming along.