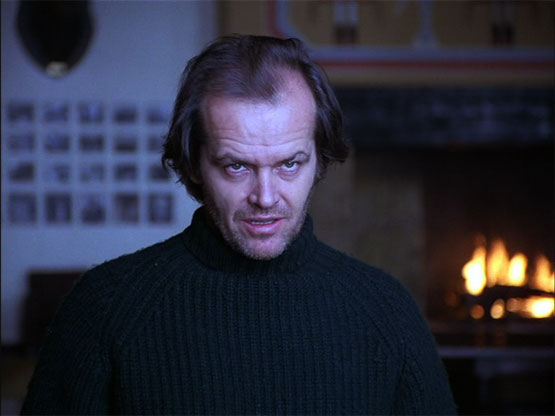 The Shining is a 1980 psychological horror film directed by Stanley Kubrick, co-written with novelist Diane Johnson, and starring Jack Nicholson, Shelley Duvall, and Danny Lloyd. The film is based on the novel of the same name, by Stephen King, about a writer with a wife and young son who accepts the job of an off-season caretaker at an isolated hotel. 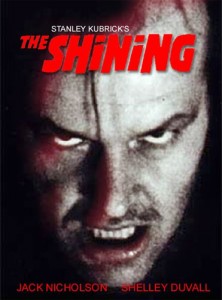 References in the form of both parodies and homages to The Shining are prominent in U.S. popular culture, particularly in films, TV shows and other visual media, as well as music.

The son, who possesses psychic abilities, is able to see things in the future and past, such as the ghosts in the hotel. Soon after moving in, and after a paralyzing winter storm that leaves the family snowed in, the father becomes influenced by the supernatural presence in the haunted hotel; he descends into madness and attempts to murder his wife and son.

Unlike most films by Stanley Kubrick, which saw a slow gradual release building on word-of-mouth, The Shining was released in a manner more like a mass-market film, opening at first in just two cities on Memorial Day, and then a month later seeing a nationwide release (including drive-ins) after extensive television advertising.

Although initial response to the film was mixed, later critical assessment had been more favorable and it is now viewed as a classic of the horror genre. Film director Martin Scorsese, writing in The Daily Beast, ranked it as one of the best horror films.

Film critics, film students, and Kubrick’s producer, Jan Harlan, have all remarked on the enormous influence the film has had on popular culture which ranges from other macabre thrillers to the cartoon series The Simpsons.

Summing up the perceptions of many aficionados, horror film critic Peter Bracke reviewing the Blu-ray release in Hi-Def Digest has written

..just as the ghostly apparitions of the film’s fictional Overlook Hotel would play tricks on the mind of poor Jack Torrance, so too has the passage of time changed the perception of ‘The Shining’ itself. Many of the same reviewers who lambasted the film for “not being scary” enough back in 1980 now rank it among the most effective horror films ever made, while audiences who hated the film back then now vividly recall being “terrified” by the experience. ‘The Shining’ has somehow risen from the ashes of its own bad press to redefine itself not only as a seminal work of the genre, but perhaps the most stately, artful horror ever made.

Indeed, The Shining has become widely regarded as one of the greatest films of the horror genre and a staple of pop culture and like many Kubrick films has been described as “seminal”. In 2001, the film was ranked 29th on AFI’s 100 Years… 100 Thrills list and Jack Torrance was named the 25th greatest villain on the AFI’s 100 Years… 100 Heroes and Villains list in 2003. In 2005, the quote “Here’s Johnny!” was ranked 68 on AFI’s 100 Years… 100 Movie Quotes list. It was named the all-time scariest film by Channel 4, Total Film labeled it the 5th greatest horror film, and Bravo TV named one of the film’s scenes 6th on their list of the 100 Scariest Movie Moments. In addition, film critics Kim Newman and Jonathan Romney both place.