Five years after writer/director Judd Apatow introduced us to Pete and Debbie in Knocked Up, Paul Rudd and Leslie Mann reprise their roles as a husband and wife both approaching a milestone meltdown in This Is 40, an unfiltered, comedic look inside the life of an American family. 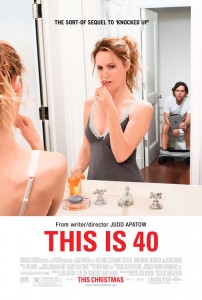 Though Debbie and Pete’s sparring scenes in Knocked Up were highlights that resonated with audiences, Judd Apatow knew it would be challenging to transition supporting characters into lead ones and deeply explore their relationships.

What emerges is a deeply honest portrait of the challenges and rewards of marriage and parenthood in the modern age.  Through the filmmaker’s unblinking lens, we follow one couple’s three-week navigation of sex and romance, career triumphs and financial hardships, aging parents and maturing children.

In his fourth directorial outing, Apatow’s new comedy captures what it takes for one family to flourish in the middle of a lifetime together.

After years of marriage, Pete lives in a house of all females: wife Debbie and their two daughters, eight-year-old Charlotte (Iris Apatow, Funny People) and 13-year-old Sadie (Maude Apatow, Knocked Up).  As he struggles to keep his record label, Unfiltered Records, afloat, he and Debbie must figure out how to forgive, forget and enjoy the rest of their lives…before they kill each other.

‘The all-star cast portraying the family and friends, colleagues and neighbors represents an ensemble of actors from many of Apatow’s previous projects, as well as new comedy players who have been welcomed into the fold.

They include Annie Mumolo and Robert Smigel as Pete and Debbie’s best friends, Barb and Barry; Charlyne Yi as Jodi and Megan Fox as Desi, two young saleswomen who should never have been given the run of Debbie’s clothing boutique; Chris O’Dowd as Ronnie and Lena Dunham as Cat, co-workers at Pete’s record label who beg him to make a change in musical direction; Jason Segel, who reprises his role from Knocked Up as Jason, now working as Debbie’s and Barb’s oversexed fitness guru; and Melissa McCarthy as Catherine, Pete’s loose-cannon nemesis at his daughters’ school.

As Apatow began production, the particulars of the story were hitting home with those working on the set.  He recalls: “One thing that feels good is that a lot of people on the crew said things like, ‘Oh, I had this argument with my wife a few days ago,’ so I’m hoping that the more specific it is, the more universal it is.