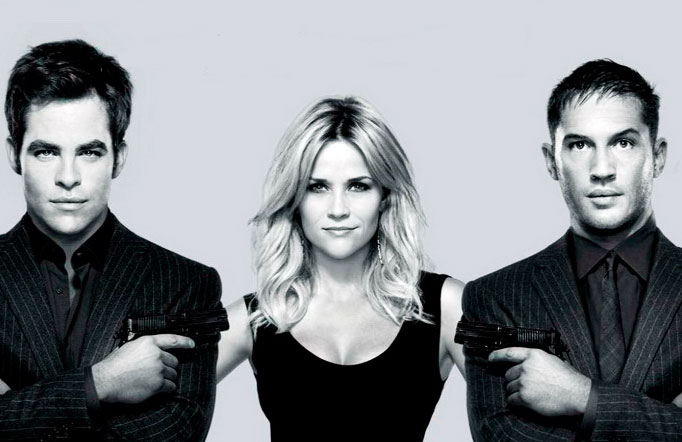 Chris Pine and Tom Hardy portray the world’s deadliest CIA operatives who are also inseparable partners and best friends… until they fall for the same woman (Reese Witherspoon).  Having once helped bring down entire enemy nations, they are now employing their incomparable skills and an endless array of high-tech gadgetry against their greatest nemesis ever – each other. 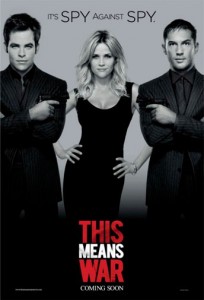 The screenings yielded outstanding scores, which revealed that THIS MEANS WAR plays to men, women, singles, and couples. This, and the ensuing positive word of mouth, led the studio to pick an unexpected release date: Valentine’s Day!

“This Means War is about two of the world’s top spies who’ve been partners and best friends for many years. Through a series of circumstances even they couldn’t anticipate, they fall in love with the same woman,” says producer-screenwriter Simon Kinberg.  “FDR and Tuck decide they’re both going to date Lauren and see which one she chooses.  As each begins to fall for Lauren, they get increasingly competitive and employ their spy tactics and techniques to sabotage each other.  Lauren, who just wanted to find the right guy, has no idea that FDR and Tuck are waging war for her love.”

The “spy against spy” storyline – what happens when two best friends who have incredible skill sets turn on each other – is integral to the film’s humor and action.  At the same time, director McG wanted these bigger than life situations to be relatable.  “We wanted to present that in a way that felt very credible,” says the Charlie’s Angels and Terminator: Salvation helmer.  “We weren’t interested in making a spoof.  And I liked taking advantage of Tuck’s and FDR’s ‘Alpha’ characteristics.  I would ask, if James Bond encountered [Mission: Impossible protagonist] Ethan Hunt, would they have a great deal of respect for each other?  Of course they would. But would one ever acquiesce to the other?  No way.  Each man recognizes the skill of the other but at the end of the day, each is betting on himself.  And that is a great engine for a movie.”

“It’s every woman’s fantasy to have two unbelievably hot, sexy guys battling over you,” says Witherspoon. “Lauren doesn’t know that Tuck and FDR are secret agents for the CIA.  THIS MEANS WAR is almost like two different movies.  My character’s in a comedy and Chris’ and Tom’s are in a big action film.”

It will come as no surprise that Pine and Hardy handled the high-octane spy action and stunts with skill and daring.  But THIS MEANS WAR audiences will see a movie “first”: Reese Witherspoon mixing it up with the boys in full throttle action mode.  Not only does she get to drive at excessive speeds on a military racetrack in a drophead coupe, she flew on a swinging trapeze, and donned a mask and firearm for an intense, ruthless game of paintball.  “By the end of the movie, Reese is at the center of the action,” says McG.

Making FDR and Tuck believable as CIA agents was tasked to Paul Maurice, a military advisor with extensive wartime experience, who serves as the film’s CIA technical advisor.  Maurice worked closely with Pine and Hardy to give them a high proficiency in weapons-handling and hand-to-hand combat.

Production designer Martin Laing and his team upped the spy-against-spy action by devising gadgets utilized by FDR and Tuck as they wage war against one another.  Laing’s team researched CIA weapons and surveillance techniques and made them even more high tech and fantastic.