In his fifth feature film as a director, Judd Apatow again brings a portrait of an unforgettable character, and a portrayal by a breakout new comedy star, together in a film written by and starring Amy Schumer as a woman who lives her life without apologies, even when maybe she should apologize. 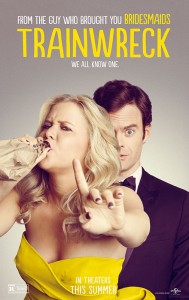 Trainwreck would mark the first time in Judd Apatow director’s career that he would lens a motion picture he hadn’t authored.

While driving to work and listening to The Howard Stern Show, Judd Apatow grew intrigued by a young stand-up comedian named Amy Schumer, whose Inside Amy Schumer on Comedy Central had debuted in 2013 and became a hit with audiences and critics alike.  Apatow grew more curious the longer that he listened and found her dark humor fascinating.

After listening to her entire interview, Apatow reached out to Schumer and suggested that they meet. “I couldn’t sleep the night before,” Schumer shares. “I was too excited to meet Judd because Knocked Up changed my life.” The longtime fan of the director/ producer’s work knew that the next day could mean everything to her burgeoning career.

Fortunately, that meeting, and the subsequent ones, went very well for all involved. Barry Mendel, who has collaborated with Apatow on This Is 40[2], Funny People and Bridesmaids[3] explains that he was as impressed as his fellow producer. “We met Amy, and she was just super-intelligent and fun, and seemed like the type of person Judd likes to work with,” he recounts.

Schumer’s initial idea for a script was a high-concept comedy, but Apatow worked with her to explore another direction, one that has given him so much success and many audience members catharses of their own. “One day, I said, ‘I think it would be better for you to write something more personal,’” Apatow states. “We started talking about her life, her relationships and what she thought was holding her back from having more successful ones. We realized that’s what the movie should be all about.”  Schumer dove head first into penning the first draft of what would become Trainwreck.

As Schumer completed the screenplay and worked with Apatow and Mendel on reaching out to their dream cast, she first considered the ideal actor with whom she could partner on screen. To play the role of Aaron, the filmmakers cast former Saturday Night Live star Bill Hader. According to Trainwreck’s director, the comic actor’s casting was a long time coming. “For years I’ve been trying to figure out a way to do a movie with Bill Hader as the lead,” Apatow says. Once Hader was cast, the script evolved to fit his sensibilities, and Aaron became a larger part of Amy’s story.

The role of Aaron’s best friend, meanwhile, was played by none other than the Cleveland Cavaliers’ LeBron James, 11-time All-NBA star and winner of four NBA MVP Awards. Hader had worked with James in 2007 when the basketball legend hosted the season premiere of Saturday Night Live.

To play the role of Amy’s charmingbut-argumentative father, the filmmakers cast respected stand-up comedian Colin Quinn, known to many for his work on Saturday Night Live. During pre-production, Quinn researched his role by accompanying Amy to visit her father in his assistedliving facility.

Principal photography on Trainwreck began on May 19, 2014, on location in New York City, where the film would shoot in its entirety. For New York native Schumer, filming in the Big Apple was key.

Prior to filming, the team conducted extensive research into the world of men’s magazines and relied on costumer Leesa Evans’ decades of experience in creating looks for every member of the New York City cast.