The film transports audiences to a colorful, wondrous world populated by the overly optimistic Trolls, who have a constant dance in their step and a song on their lips, and the comically pessimistic Bergens, who are only happy when they have Trolls in their stomachs.  After the Bergens invade Troll Village, Poppy (Anna Kendrick), the happiest Troll ever born, and the overly-cautious, curmudgeonly Branch (Justin Timberlake) set off on a journey to rescue her friends.  Their mission is full of adventure and mishaps, as this mismatched duo try totolerate each other long enough to get the job done. 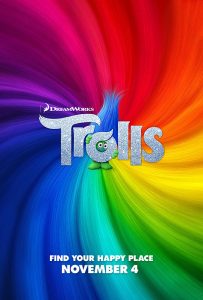 For the film’s overall look, director Mike Mitchell and co-director Walt Dohrn also pay homage to one of the cinema’s most towering figures, Hayao Miyazaki, a Japanese film director, producer, screenwriter, animator, author, and manga artist whose many acclaimed films include the animated classics Spirited Away and Princess Mononoke.

Happiness was foremost in the minds of TROLLS director Mike Mitchell and co-director Walt Dohrn, even during the earliest stages of story discussions with screenwriters/co-producers Jonathan Aibel and Glenn Berger and producer Gina Shay.

Their research into Troll lore, which sprang from Scandinavian mythology, revealed that Trolls came in myriad shapes and sizes, from monstrous giants to tiny creatures who granted wishes.  As DreamWorks had done with Shrek, Mitchell and Dohrn decided to adapt the Trolls mythology to create a new universe and set of characters.

The filmmakers note that they did embrace one aspect of previous Trolls history.  “We were fascinated by how these creatures were originally scary-ugly and evolved over time into being cute-ugly,” says Mitchell.  “In the 1970s they became a symbol for happiness.”  As they continued their explorations of all things Troll, Mitchell and Dohrn zeroed in on the motifs of happiness and optimism, and their imaginations ignited.

In many ways, says producer Gina Shay, another of Mitchell and Dohrn’s Shrek franchise alumna, TROLLS hearkens back to the 1970s, a time “when there was this feeling of freedom; disco, pop and dance music was everywhere; and everybody seemed to be roller skating.  We wanted the Trolls to reflect that joy in their society.  They’re also very peaceful.”

With that through line of happiness in place, Mitchell and Dohrn began mapping out the story, enlisting the help of the screenwriting team of Jonathan Aibel and Glenn Berger, who had been the architects of another animated film universe, having written the three Kung Fu Panda blockbusters for DreamWorks Animation.  Berger calls the new assignment “a real creative change of pace, and so much fun.”

Kendrick appreciates Poppy’s toughness, sassiness, can-do attitude, loyalty and, most of all, her leadership skills.  But when she first met with Mitchell and Dohrn to discuss the role, the actress notes she had some concerns.  “I hardly felt like the person to play the happiest Troll; sugary sweet isn’t really my forte.  I warned Mike, Walt and Gina that I might lead Poppy down a feistier path.  I think I used the term ‘sparkplug.’” When the filmmakers assured Kendrick that her vision for Poppy was in sync with theirs, she embraced her inner Troll with a vengeance.

“Yeah, Branch is obsessed,” says Timberlake, who embraced some of Branch’s un-Troll-like attitude.  “I thought playing Branch’s sarcasm and pessimism would be a lot of fun,” he points out, “even though I’m generally not like that — at least not after I’ve had my morning coffee.”

Just as Kendrick was wary of overdoing Poppy’s perpetual peppiness, Timberlake did not want to make Branch too much of a grump.  “I was concerned that he was going to be overly cantankerous and that some in the audience weren’t going to like him,” he explains.  “Fortunately, Mike, Walt and I struck a really nice balance with the character’s demeanor.  But we never lost sight of the fun that came with Branch and Poppy being polar opposites of one another.”

The Bergens are the flip side of the Trolls.   These depressed giants believe that menacing Trolls is the only viable path to their happiness.  The leader of the Bergens, voiced by Christopher Mintz-Plasse, is King Gristle, Jr.,a surly, twenty-something who has vowed to bring happiness back to Bergen Town by capturing the nearby but well-hidden Trolls.   Gristle Jr. is the son of King Gristle, voiced by comedy legend John Cleese.

Gristle’s behavior can also be explained by the young royal having “never experienced happiness or love,” says Mintz-Plasse, whose signature comedy role was as McLovin in the hit Superbad.   The actor notes that when he first discussed the role with the filmmakers, he saw a picture of Gristle and thought, “‘Oh, okay, he’s kind of a gremlin-like guy.’  I was prepared for Mike and Walt to ask me to throw on some sort of weird voice.  ‘Nope,’ they said, ‘we want exactly what you do, straight Christopher Mintz-Plasse.’”

Voiced by Zooey Deschanel (New Girl, Elf), Bridget is the sweetest, most kindhearted Bergen in all of Bergen Town; in fact, she may be the only kindhearted Bergen. “She’s our Cinderella,” says Mitchell. Screenwriter Jonathan Aibel has a special affection for Bridget, a character he describes as being “a challenge to write, because when we meet her, she’s uncommunicative. So to see her grow and learn how to express herself is probably my favorite part of the movie, especially when she goes on her dream date with King Gristle.”

A Bergen of true evil intent is Chef (Christine Baranski, making her animated feature debut), who once held a coveted spot in the Royal Bergen Kitchen. Baranski, who has portrayed a string of unforgettable characters, including a high-powered attorney on the acclaimed series The Good Wife, imbues Chef with a skillful balance of menace and fun.  And she has no bigger fan than Kendrick, who had worked with the versatile actress in the musical film Into the Woods.

The technology available for animated filmmaking is more sophisticated and photo-realistic than ever before.  In many features, for example, grass has never looked grassier and water never more… watery. But the TROLLS filmmakers had a very different kind of vision in mind for these bleeding-edge visual effects tools.  They decided to create a world unlike any other experienced on film.   “We wanted to transport audiences to a handmade universe,” says Mitchell.

Production designer Kendal Cronkhite-Shaindlin based the film’s look on Fiber Art textures, including felts, velvet, macramé, and flocked materials.  The filmmakers called it “fuzzy immersion,” a process they say will make audiences want to reach into the film and touch the characters and settings.

TROLLS is the first DreamWorks Animation film to use Willow, the company’s proprietary long hair simulation tool.  Willow is unique in that it is both efficient and stable in how it solves lots of “bad hair day” problems, such as   bending, friction, elasticity, and collisions of hundreds of thousands of hairs on a character’s head.