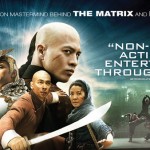 True Legend is David Carradine’s final film appearance before his death on June 3, 2009, had a accidental asphyxiation in Bangkok, Thailand at the age of 72.

This is David Carradine’s final film appearance before his death on June 3, 2009, had a accidental asphyxiation in Bangkok, Thailand at the age of 72.

In TRUE LEGEND, legendary martial arts choreographer and filmmaker, Yuen Woo Ping brings the epic tale of Su Can, Master of the Drunken Fist.  A well-respected martial arts teacher and a good husband and father, Su Can’s journey begins when his vengeful brother, Yuan, returns from war.  Seeking revenge from a dark family history, Yuan, armed with the Five Venom Fist, destroys Su Can’s family and ultimately his dignity.  Reduced to a beggar, Su Can finds apprenticeship from Lord Wushu and adapts to a new form of martial arts, the Drunken Fist.  At peace with himself, he regains his strength to reclaim his life and returns home to claim retribution and his family honor.  Good versus evil, two skilled rivals battle to become the ultimate warrior.

Film is presented in both 2D and 3D, and promoted as the first Chinese 3-D film, the film was considered one of the biggest box office failures of the year making only RMB46.5 million ($6.82 million) with an estimated budget of $20 million USD.